You are here: Home / Advanced / The Key To Preventing Spinal Pain: Understanding Levers
1352
SHARES
Share on FacebookShare on Twitter
GoogleLinkedin

The most common cause for the initiation of the pain electrical signal is an inflammatory reaction in the tissues where the pain nerve receptors reside (1).

“The Origin of all Pain is Inflammation and the Inflammatory Response”

It is because of this inflammation-pain response that so much pain is treated with anti-inflammatory approaches:

Steroidal and non-steroidal anti-inflammatory drugs are associated with many side effects, some serious, and some fatal, especially if consumed chronically, including:

“Adverse reactions to non-steroidal anti-inflammatory (NSAIDs) medication have been well documented. Gastrointestinal toxicity induced by NSAIDs is one of the most common serious adverse drug events in the industrialized world.”

“Extreme complications, including gastric ulcers, bleeding, myocardial infarction, and even deaths, are associated with their [NSAIDs] use.”

Almost all patients who take the long-term NSAIDs will have gastric hemorrhage, 50% will have dyspepsia, 8% to 20% will have gastric ulceration, 3% of patients develop serious gastrointestinal side effects, which results in more than 100,000 hospitalizations, an estimated 16,500 deaths, and an annual cost to treat the complications that exceeds 1.5 billion dollars.

“NSAIDs are the most common cause of drug-related morbidity and mortality reported to the FDA and other regulatory agencies around the world.”

One author referred to the “chronic systemic use of NSAIDs as ‘carpet-bombing,’ with attendant collateral end-stage damage to human organs.”

Chiropractic spinal adjusting reduces pain by using mechanisms that function in addition to the ability to help disperse the accumulation of inflammatory exudates. The most noted of these applies to the mechanical “closing of the ‘Pain Gate’” (4, 5, 6).

Whatever Tissue is Causing Spinal Pain, it Must Have a Nerve Supply

It has been understood for decades that the articular hyaline cartilage has no nerve supply, and consequently is not capable of initiating the pain electrical signal. This holds true, even when the cartilage is injured. Sadly, injured articular hyaline cartilage degenerates at an accelerated rate (7, 8, 9, 10), creating arthritic changes that often irritate and inflame adjacent tissues, eventually generating the pain electrical signal to the brain. This is the explanation as to why some spinal injuries are initially asymptomatic, but become painful as a function of time as the degenerative process progresses.

Other tissues that have been shown to be pain insensitive include the fascia (11).

Stephen Kuslich and colleagues completed an extensive assessment, involving 700 live humans, as to the tissue sources of spinal pain in 1991 (11). These authors performed 700 lumbar spine operations using only local anesthesia to determine the tissue origin of back pain. The tissues they assessed for pain generation included skin, fat, fascia, supraspinous ligament, interspinous ligament, spinous process, muscle, lamina, facet capsule, facet synovium, nerve root, dura, compressed nerve root, normal nerve root, annulus fibrosus of the disc, nucleus of the disc, and vertebral end plate. All of these tissues, except for the fascia, were capable of producing spinal pain. They discovered that the primary “sight” for chronic back pain was the annulus of the intervertebral disc.

Pertaining to the cervical spine, studies have indicated that the primary tissue that initiates the chronic neck pain signal is the facet joint capsular ligaments (12, 13).

The inflammatory response that initiates the pain electrical signal can have a number of causes, including:

The healthcare provider attempts a differential diagnosis between these different etiologies by assessing factors such as history, family history, systemic factors, etc. The healthcare provider may also rely upon imaging and laboratory findings. Each of these can be influenced by individual genetics, epigenetics, nutrition, prior life events (injuries, pregnancies, etc.), occupation, ergonomics, age, fitness, etc. Successful management depends upon ascertaining a clear (or reasonably probable or suspected) etiology. A prudent healthcare provider will consequently do their best to make an accurate differential diagnosis.

Chiropractic clinical practice specializes in injury (trauma) and/or chronic mechanical stress as the etiology. Chiropractors not only treat the mechanical findings, they also inform the patient as to causation and to continuing causes of their ongoing mechanical problems that are initiating their pain. The chiropractor then coaches the patient on strategies to avoid or minimize the mechanical causes of their tissue inflammatory response. Often, patients can prevent future spinal problems by using this same practical advice. The basic advice requires knowledge of levers.

The efficiency of human function in a gravity environment is an integration of mechanics and biology, known as biomechanics. Mechanics comprises a group of simple machines, which include:

There are three classes of levers. All three types of levers have three common features:

It is the sequential arrangement of the three common features that determine the class of the lever:

Examples of a first-class lever include a teeter-totter or crowbar. 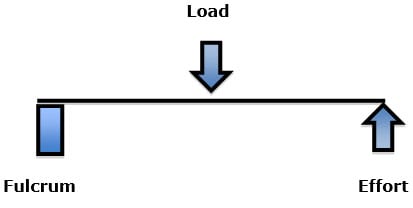 An example of a second-class lever is a wheelbarrow: The wheel is the fulcrum; the effort is the handlebars; the load is in between. 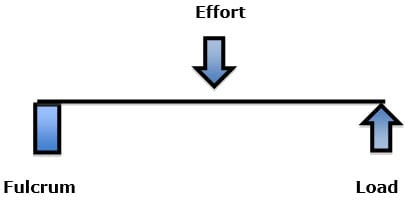 An example of a third-class lever is tweezers, where the effort is applied between the fulcrum and the load.

The strongest mechanical structure is a column. This is why engineers use columns to support bridges and buildings. However, the human spine cannot function as a column. The human spine must be able to allow us to bend, stoop, lift, twist, etc. Consequently, a different mechanical design is required. Upright human posture is a three dimensional first class lever mechanical system, such as a teeter-totter or seesaw (14, 15).

Recall, in the first class lever, the fulcrum is located between the load and the effort.

The fulcrum of a first class lever is the place where the load is the greatest: if excessively heavy objects are placed on both ends of the teeter-totter, it will break in the middle, at the fulcrum.

The force experienced at the fulcrum of a first class lever system is dependent upon three factors:

The magnitude of the load (weight)

The distance the load is away from the fulcrum (lever arm)

The addition of the counterbalancing effort required to remain balanced

The effective load (EF) at the fulcrum is the actual load (AL), multiplied by the lever arm (LA), plus the counterbalancing effort (CBE):

If the same actual load were closer to the fulcrum, the effective load changes significantly: 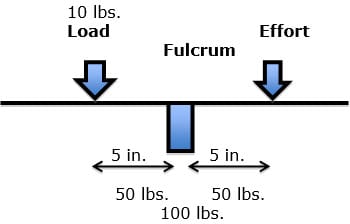 In the spine, the fulcrum of the first class lever of upright posture is primarily the vertebral body/disc, and the two facet joints.

The effort is the required contraction of the spinal muscles, on the opposite side of the fulcrum, to keep the spine balanced and prevent it from tipping over. This muscle contraction adds to the load at the fulcrum.

This means that when the first class lever of upright posture is altered, for any reason, there is an increased effective mechanical load born by the fulcrum, i.e. the spinal intervertebral discs and facet joints. Such increased mechanical loads accelerate degenerative joint disease and the inflammation, altering the pain thresholds (14, 16). In their 1990 book Clinical Biomechanics of the Spine (15), White and Panjabi state:

“The load on the discs is a combined result of the object weight, the upper body weight, the back muscle forces, and their respective lever arms to the disc center.”

Events that increase the actual load at the spinal joints (disc and facets and require counterbalancing muscle contraction include postural distortions, lifting ergonomics (14), and weight problems (15).

When a person gains abdominal weight (obesity, pregnancy), the first class lever system of upright posture is altered in such a manner that the intervertebral disc and facet joints bear significantly more weight. To counterbalance the weight, the muscles on the other side of the fulcrum (spine) must constantly contract with more force, or the person would fall forward. The black arrow attached to the posterior spinal elements represents the muscle contraction (14). 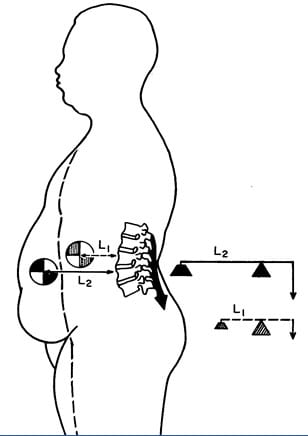 This constant muscle contraction with more effort, creates muscle fatigue and myofascial pain syndromes. Rene Cailliet, MD states “This increase [in muscle tension] not only is fatiguing, but acts as a compressive force on the soft tissues, including the disk.” (14).

Rene Cailliet, MD, also uses the first class lever example in his 1996 book Soft Tissue Pain and Disability pertaining to the forward head syndrome (17). The patient has an unbalanced forward head posture. Dr. Cailliet assigns the head a weight of 10 lbs. and displaces the head’s center of gravity forward by 3 inches. The required counter balancing muscle contraction on the opposite side of the fulcrum (the vertebrae) would be 30 lbs. (10 lbs. X 3 inches): 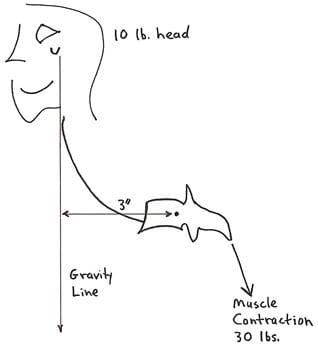 Dr. Cailliet explains how the constant contraction in the counterbalancing muscles creates a cascade that leads to muscle fatigue, inflammation, fibrosis, and eventually to chronic musculoskeletal pain syndromes (17): 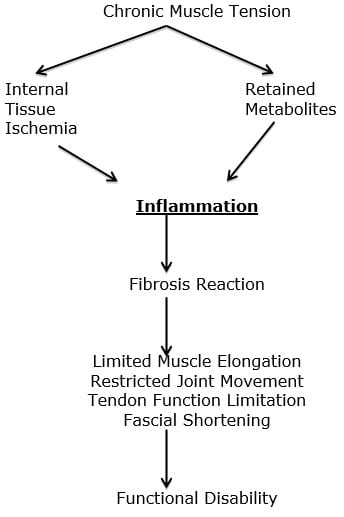 It is much easier to hold a 10 lb. weight against your chest than in an outstretched arm. The reason is leverage. With the first class lever of upright posture, the most vulnerable tissues to mechanical loading stress, breakdown, degeneration, inflammation, and pain are the intervertebral disc and facet joints. This is because they function as the fulcrum. Numerous studies have identified the intervertebral disc and facet joints as the primary generators of chronic spinal pain. Likewise, the leverage stress applied to the fulcrum (disc and facets) must be counterbalanced my muscle contraction (effort), or the patient would fall over. This leads to chronic muscle problems (myofascial pain syndrome).