Vertigo is defined as:

“a condition in which somebody feels a sensation of whirling or tilting that causes a loss of balance.”

To describe the sensation of vertigo, patients often use words such as dizziness, giddiness, unsteadiness, or lightheadedness.

The etiology, diagnosis, and treatment are self-evident: stop spinning and the sensation will subside.

The afferent information that enters the vestibular nucleus and are thus capable is initiating a sensation of vertigo, can arise for a number of sources. The classic sources are these four:

Canalithiasis is the pathological diagnosis for the sensation of vertigo that occurs as a consequence of dislodged mechanical particles in the semicircular canals of the inner ear. The subjective diagnosis is benign paroxysmal positional vertigo, or BPPV. This type of vertigo is so named because:

Benign: the vertigo is not caused by a serious pathology such as infection or malignancy

Paroxysmal: the bout of vertigo last for a short duration, typically 20 – 60 seconds; an uncomfortable sensation of lightheadedness may persist for several hours

Positional: the bout of vertigo is triggered by putting the head into a specific position

Vertigo: for the sensation of spinning

The mechanical treatment of canalithiasis (BPPV) involves the precise positioning and timing of the head through a series of maneuvers in an effort to move the offending particles along the semicircular canals towards the utricle, which is an inert location. This technique was pioneered by physician John Epley, MD, from Portland Oregon, in 1992 (1). This technique is very successful in the appropriate patient. A PubMed search of the National Library of Medicine database (January 2010) finds more than 100 studies on the technique.

It has been shown that temporomandibular joint afferents will fire to the vestibular nucleus, creating the sensation of vertigo. This was first reported in the Journal of Laryngology and Otology in 1965 in an article titled (3): 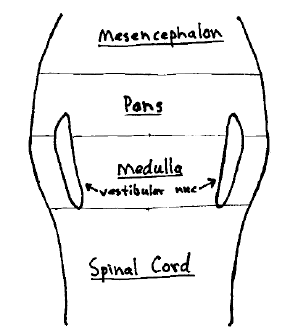 It has been known for more than three decades that the injection of saline irritants into the deep tissues of the upper cervical spine will create the sensation of vertigo in normal human volunteers (6). This cause of vertigo is classically termed cervical vertigo.

Clinicians have documented a relationship between cervical spine trauma and the symptoms of vertigo (8). In her chapter titled “Posttraumatic Vertigo”, Dr. Linda Luxon (7) notes that this vertigo can be explained by “disruption of cervical proprioceptive input.”

She further asserts that the major cervical spine afferent input to the vestibular nuclei “arises from the paravertebral joints and capsules, with relatively minor input from paravertebral muscles.”

The implication of clinical application to these findings is that dysfunctional upper cervical spinal joints and their capsules can alter the proprioceptive afferent input to the vestibular nucleus resulting in the symptoms of vertigo; treatment would be to improve the mechanical function of these joints. 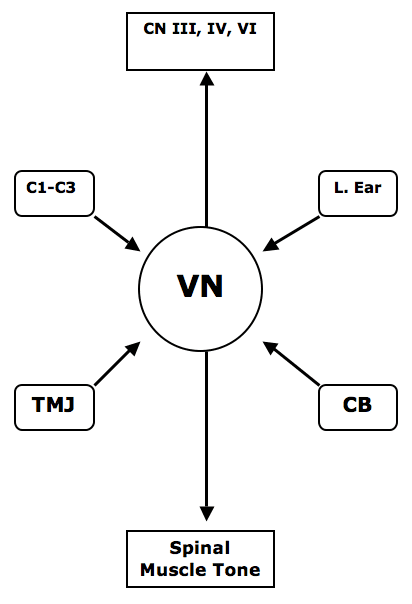 This drawing from the journal Spine (9) shows the neurological connections between the vestibular nuclei, the cranial nerve control of eye movement (CN III, IV, and VI), and the tone of the spinal muscles: 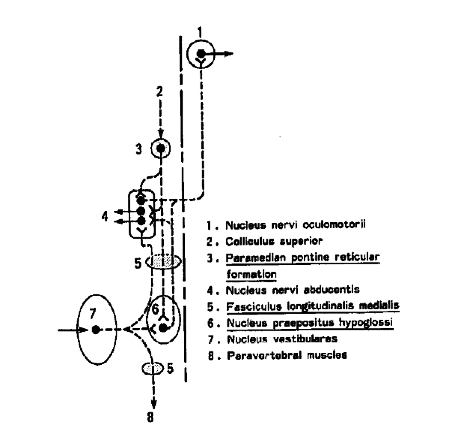 Drs. Baloh and Honrubia (2) note that the normal functional relationship between the vestibular nucleus, the control of eye movement, and the tone of spinal muscles can be disrupted by “electrically stimulating the capsules of the upper cervical joints.” Once again, this implies that mechanical dysfunction of the joints of the upper cervical spine can initiate vertigo, nystagmus, and alterations of spinal muscle tone; treatment is to the dysfunctional cervical joints.

In 1998, an article appeared in the European Spine Journal titled (11):

The authors defined “dysfunction” as a reversible, functional restriction of motion of an individual spinal segment or as articular malfunction presenting with hypomobility. The authors also state that upper cervical spine dysfunctions can cause vertigo, and they cite 13 references to support the premise. They explain the vertigo as a consequence of disturbances of the proprioception from the neck. They cite an additional 4 references to claim that only dysfunctions of the upper cervical spine can cause vertigo, noting that anatomical studies identify links between cervical spine receptors and the vestibular nuclei.

In this study the authors used 50 patients who were referred to rule out a cervical spine problem as a cause of vertigo. All patients displayed symptoms of dizziness, and preceding ear examination and neurology examination were equivocal. A reproducible manual palpation examining technique was used to diagnose segmental cervical spine dysfunction. This type of examination is emphasized in chiropractic college.

The cervical spine dysfunctions were treated with mobilization and manipulative techniques. The patients subjectively rated themselves as:

“free of vertigo”, “improved”, or “not improved”, as follows:

Thirty-one patients (31/50 = 62%), displayed dysfunctions of the upper cervical spine at the initial visit. These dysfunction were located as follows:

Combined dysfunctions were at:

At the 3-month follow-up, 24 of the 31 patients of group A (77%) reported lasting improvement of vertigo, and 5 of them reported complete relief of vertigo. Seven patients did not improve (23%).

Nineteen patients (19/50 = 38%), did not have dysfunctions of the upper cervical spine.

After 3 months of outpatient physical therapy, only 5 patients (26%) reported an improvement of vertigo, while the remaining 12 patients (64%) had vertigo of unchanged intensity.

The authors state the following conclusions:

“Physical therapy is more likely to succeed in reducing vertigo symptoms if these patients present with an upper cervical spine dysfunction that is successfully resolved by manual medicine prior to physical therapy.”

“We regard the cervical spine dysfunction seen in patients of group A as the principal cause of their vertigo.”

“In the presence of vertigo, our presented data suggests consideration of cervical spine dysfunctions, requiring a manual medicine examination of upper motion segments.”

“A non-resolved dysfunction of the upper cervical spine was a common cause of long-lasting dizziness in our population.”

In 2002, an article appeared in the Journal of Whiplash & Related Disorders, titled (11):

These authors state that “cervical vertigo” was first published in the journal The Lancet in 1955 (12). However, my PubMed database search of the National Library of Medicine (January 2010) found 486 citations beginning in 1950.

In this article, these authors state:

“Cervicogenic dizziness, especially in whiplash patients, may result from disturbed sensory information due to dysfunctional joint and neck mechanoreceptors.”

“Dizziness and vertigo are common complaints of neck pain patients with 80 to 90% of whiplash sufferers reporting these symptoms.”

“Dysfunction or trauma to connective tissues such as cervical muscles and ligaments rich in proprioceptive receptors (mechanoreceptors) may lead to sensory impairment.”

“Emerging evidence suggests that dizziness and vertigo may commonly arise from dysfunctional cervical spine structures such as joint and neck mechanoreceptors, particularly from trauma.”

In this study, the authors evaluated 180 consecutive neck pain patients over the age of 18 were recruited from the outpatient clinic. Of these, 71 patients (40.57%) reported neck pain resulting from trauma and 60 patients (33.5%) were suffering from dizziness. Patients were excluded if they had radiographic evidence of congenital anomalies, fracture/dislocation, inflammatory, infectious or other serious pathologies. Patients were asked to answer questions regarding demographics, history of injury/trauma and duration of neck pain, and presence of neck pain related dizziness/unsteadiness. Pain intensity was measured using two, 11-point numerical rating scales while disability was measured with the Neck Disability Index (NDI).

This “study results reinforce the concept of neck pain and disability leading to cervicogenic dizziness/vertigo due to dysfunction of the somatosensory system of the neck.” The basic model presented in this article is that trauma causes “dysfunctional cervical spine structures” resulting in altered “joint and neck mechanoreceptor” function, causing both pain and dizziness.

An article pertaining to the treatment of cervical vertigo, tinnitus and nystagmus appeared in the International Tinnitus Journal in 1998, and was titled (13):

The Influence of Atlas Therapy on Tinnitus

“More than a century ago, Sherrington showed, on his famous decerebrated cats, that touching the dura or stimulating the root of the C2 nerve leads to a slackening of all muscles. Atlas therapy, therefore, seems to work on a similar principle.”

In this study, “atlas therapy” was conducted on 11 patients with whiplash injuries, with these outcomes:

Dr. Kaute concluded, “atlas therapy has an effect on the muscles of the neck and lowers their afferences to the brainstem.”

“Irritating these posterior cervical muscles and placing them under tension must precipitate a great afferent input to the vestibular nuclei in the brainstem. This response seems to be one of the origins of idiopathic tinnitus. Diminishing the tension via atlas therapy seems to lower the proprioception and nociception output, leading to normalization of the flow of information to the brainstem and, as a consequence, the lessening of tinnitus.”

“Treating these pathological effects as soon as possible is necessary before the process is definitely established through the plasticity of the neural system.”

“If the input to the brainstem is normalized by atlas therapy, the problem can be resolved.”

Hundreds of studies over the past 60 years have established that dysfunctions of the joints and/or muscles of the upper cervical spine can cause the sensation of vertigo. Modern neuroanatomical evidence shows that upper cervical spine mechanoreceptors/proprioceptors fire to the vestibular nucleus as a portion of our human upright balance mechanisms. Additionally, these studies link the functional neurophysiology of the upper cervical spine mechanoreceptors/proprioceptors to not only the vestibular nucleus, but also to the movement of the eyes and to the spinal musculature.

The mechanoreceptor/proprioceptor dysfunction of the upper cervical spine can be ascertained by one appropriately trained in manual diagnostics, static palpation, motion palpation, and/or radiographically assessed vertebral alignment symmetry. Such skills are emphasized in chiropractic college and in post-graduate training courses.

Appropriate and safe treatment of upper cervical spine mechanical problems is a skill that takes much training and initial supervision. The upper cervical spine is anatomically unique, with great mobility coupled with reduced stability. It houses critical nerves and blood vessels. The safe and appropriate management of cervical vertigo requires training, skill, and respect, issue that are stressed in the education of the modern chiropractor.