Pain is a brain cortical event. Pain does not exist in a back or neck or foot. Pain is perceived by brain cortical neurons. Any intervention that reduces pain is altering the electrical signal depolarization of brain cortical pain perceiving neurons. As stated by Drs. Heidi Haavik-Taylor and Bernadette Murphy in 2007 (8):

“Spinal manipulation is a commonly used conservative treatment for neck, back, and pelvic pain.”

“The effectiveness of spinal manipulation in the treatment of acute and chronic low back and neck pain has been well established by outcome-based research.”

“Chiropractic spinal manipulation is an alternative treatment for back pain.”

“Research on chiropractic spinal manipulation has been extensively performed worldwide, and its efficacy on musculoskeletal symptoms has been well documented.”

State licensure for the practice of chiropractic began in Kansas in 1914; the final state to license chiropractic was Louisiana in 1974.

In the early 1970s, the United States Department of Education (actually is was HEW back then, for Health, Education, and Welfare) recognized the Council on Chiropractic Education as an accrediting agency for chiropractic education. Along with this recognition came reimbursement under Medicare. Today chiropractic services are recognized and reimbursed by Medicare, Veteran’s Affairs (military), Worker’s Compensation, Personal Injury (automobile insurance), and most private health insurance policies.

For example, in 1931, the Kentucky House of Reform presents a series of 244 adolescent boys who were incarcerated by the State of Kentucky because of criminal or behavioral problems in the year 1931 (2). The report documents that “almost 100 per cent have shown improvement in conduct, and “144 of our 244 patients have been paroled since we have been giving them Chiropractic treatment.”

“IN ADDITION TO REGULAR PHYSICIANS EMPLOYED AT THE INSTITUTION WE HAVE HAD THE SERVICES OF CHIROPRACTORS. ALLOW ME TO SAY THAT I FEEL THE FINE SHOWING IN THE NUMBER OF PROMOTIONS AND DISMISSALS FROM THE INSTITUTION IS LARGELY ATTRIBUTABLE TO THE VERY EXCELLENT WORK DONE BY THE CHIROPRACOTORS WHO HAVE ALMOST DAILY LOOKED AFTER THE HEALTH AND GENERAL WELFARE OF THESE BOYS.” [these words were capitalized in the reference]

Another example is the legal briefs presented to the 1935 session of the North Dakota Legislature by the Honorable Judge A.W. Ponath (3). Judge Ponath was County Judge of the Probate Court of Richland County, Wahpeton, North Dakota. Judge Ponath’s legal briefs present 44 cases where mentally ill patients were treated chiropractically in the Jamestown State Insane Asylum (North Dakota). Twenty-seven of the 44 cases “have either been cured or sufficiently recovered so that they can remain at home and resume their former responsibilities [61%].” Judge Ponath notes that these “patients who had for the most part had already spent considerable time in asylums or sanatoriums,” and “in many cases had been declared incurable” by Medical Authorities. Judge Ponath notes that 70-75% of such institutionalized persons are doomed to an asylum prison for life.

The science of chiropractic (and traditional osteopathy) advanced significantly as a consequence of the efforts of Irvin M Korr, PhD (1909-2004, age 94). It is rare for any person to have their obituary included in the National Library of Medicine database, yet Dr. Korr’s can be found twice (4, 5).

Dr. Korr was a graduate of the University of Pennsylvania and he earned his doctorate in physiology at Princeton University. His obituary states (5):

Dr. Korr “spent decades adding scientific legitimacy, through experimentation and publication, to the clinically based practice of osteopathy. Much of their earlier work center on demonstrating the hyperarousal of the sympathetic nervous system associated with what was then termed the osteopathic lesion.”

Dr. Korr has 51 articles in a PubMed search of the US National Library of Medicine, spanning the years 1946-2002. Decades of Dr. Korr’s research, experimentation and publications are summarized in his 1979 article titled (6):

The spinal cord as organizer of disease processes:
Hyperactivity of sympathetic innervation as a common factor is disease

Dr. Korr’s physiological explanations were enhanced significantly in 1997 with the work of Hongxing Jiang, PhD, and colleagues from the Department of Surgery, University of Alberta, Edmonton, Canada. Their article was published in the journal Spine, and titled (7):

Identification of the Location, Extent, and Pathway of Sensory Neurologic Feedback After Mechanical Stimulation of a Lateral Spinal Ligament in Chickens

By immunohistochemically locating the sites of Fos protein production in neuronal cell bodies, Dr. Jiang and colleagues were able to trace the location, extent, and pathways of sensory feedback after the mechanical stretching of a lateral spinal ligament. The presence of Fos indicated the physiological neurological chain cascade that was initiated by a mechanical input into a single spinal ligament.

The results showed that a mechanical input to the intertransverse ligament would stimulate the following sequence of neurons:

Dr. Jiang and colleagues note that spinal ligaments are not “simple mechanical constraints across joints that provide tension when stretched.” Additional functional roles for spinal ligaments include the coordination of muscle tone around joints and to provide a neurologic feedback mechanism to enhance joint stability. They state:

“In light of these results it is now thought that ligaments do more than act as simple mechanical links between bones; they also may provide important proprioceptive feedback as part of a neurologic protective mechanism for the ligaments themselves and for the joints they span.”

In this study, Dr. Jiang and colleagues note that spinal ligaments are richly innervated with mechanoreceptors and nociceptors. The mechanoreceptors function as initiators of feedback pathways that include the spine, the brain stem, the brain and the sympathetic nervous system. These authors state:

“The results of the current study have shown that mechanical stretching of an important lateral spinal ligament in chickens produced a barrage of sensory feedback from several levels of the spinal cord and responses from the contralateral side of the cord at equivalent levels. Further, the pathway of the sensory input can be traced to include nerve cell bodies in the dorsal root ganglia, the sympathetic ganglia, the intermediate horn of the spinal cord, the cuneatus and gracilis nuclei of the medulla oblongata, the vestibular nuclei, and the thalamus.” 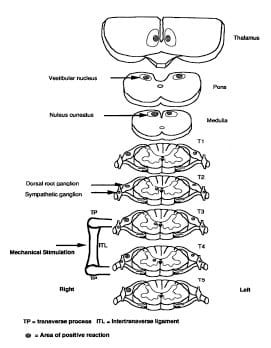 Dr. Korr’s work was further enhanced in 2007 with the work of Heidi Haavik-Taylor and Bernadette Murphy from the University of Auckland. New Zealand. Published in the journal Clinical Neurophysiology and titled (8):

Drs. Haavik-Taylor and Murphy recorded the neurophysiological effects of cervical spine manipulation to dysfunctional cervical joints using brainstem and cortical somatosensory evoked potentials (SEPs) in 12 subjects. They also recorded these electrical signals in a control group (also 12 subjects) who were passively mobilized but not manipulated.

Results show a significant change in the amplitude of parietal (sensory) and frontal (motor) SEP components following the single session of cervical spine manipulation. No SEP changes were observed in the passive head movement control condition. The authors state:

“These findings may help to elucidate the mechanisms responsible for the effective relief of pain and restoration of functional ability documented following spinal manipulation treatment.”

“The passive head movement SEP experiment demonstrated that no significant changes occurred following a simple movement of the subject’s head. Our results are therefore not simply due to altered input from vestibular, muscle or cutaneous afferents as a result of the chiropractor’s touch or due to the actual movement of the subjects head. This therefore suggests that the results in this study are specific to the delivery of the high-velocity, low-amplitude thrust to dysfunctional joints.”

“Spinal manipulation of dysfunctional joints may modify transmission of neuronal circuitries not only at a spinal level but at a cortical level, and possibly also deeper brain structures such as the basal ganglia.”

The spinal manipulation in this study was applied to dysfunctional cervical joints, as determined by a “registered chiropractor.”

This study documents cortical brain changes as a consequence of cervical spinal adjusting.

The authors are from the Division of Cyclotron Nuclear Medicine, Tohoku University (Graduate School of Medicine), Sendai, Japan. I believe that their work integrates that of Korr, Jiang, and Haavik-Taylor/Murphy.

The authors cite 9 studies that have found that spinal dysfunction affects the autonomic nervous system. This is in agreement with the studies of Korr (6) and Jiang (7). They note that the sympathetic branch of the autonomic nervous system controls the diameter of the arterial system. Increased sympathetic tone would cause vasoconstriction, reducing the delivery of glucose and thereby reducing the uptake metabolism of glucose into ATP energy.

Positron emission tomography (PET) scan is a powerful neuroimaging technique to investigate neuronal activity in the human brain, including the uptake of glucose for metabolism. Using PET and FDG, the authors evaluated brain regions in 12 men before and after chiropractic spinal adjusting. This is the first chiropractic study to examine regional cerebral metabolism using positron emission tomography (PET).

Results from this study include:

The chart below summarize their findings:

Chiropractors frequently observe and therefore talk about the improvement of non-musculoskeletal syndromes, including brain function, in patients under chiropractic care. A number of lines of scientific investigations make the following mechanism biologically plausible:

The spinal adjustment is intended to improve the way the patient lives, functions, and exists in a gravity environment. The improvement in spinal mechanical function “closes the pain gate,” and pain perception is reduced (inhibited). (10)

Spinal mechanoreceptors are proven to communicate with the sympathetic nervous system (preganglionic sympathetic efferents in lamina VII of the spinal cord), and their influence is inhibitory (18, 19).

Spinal adjusting works in part because of inhibition of increased sympathetic tone.

The studies presented here support a link between spinal function, chiropractic spinal adjusting, and limbic emotional function. They may help explain the anecdotal observations of the Kentucky House of Reform and North Dakota’s Judge Ponath.