The total sum of suffering caused by migraine is higher than any other kind of headache (1). “Migraine is often incapacitating, with considerable impact on social activities and work, and may lead to significant consumption of drugs.” (1)

The diagnosis of migraine is made clinically. There are no blood tests, imaging, or electro-physiologic tests to establish the diagnosis (1).

The strict definition of migraine headache is (2):

The migraine diagnosis is assured when these characteristics are present:

An article appearing in the Business Section of the San Francisco Chronicle newspaper on July 20, 2014, stated (3):

The author, Stephanie Lee, notes that 36 million Americans suffer from migraine headaches. The migraine market in developed countries will grow to about $5.4 billion in 2022. The problem is that current treatments are not very effective and they may have dangerous side effects. Ms. Lee notes (3):

Chronic migraine is defined as a severe headache that occurs at least 15 times per month. It is ironic that opioids taken for migraines cause chronic migraines in many patients. Ms. Lee concludes (3):

Evidence is mounting that chiropractic and spinal manipulation may provide this sought-after safe and effective alternative.

In the modern era of musculoskeletal clinical anatomy, Australia’s Nikoli Bogduk, MD, PhD, is perhaps the most accomplished and respected. A search of the National Library of Medicine using the PubMed search engine with “bogduk n”, locates 259 references (as of May 12, 2017). In addition, Dr. Bogduk has written numerous books, chapters in books, and invited opinion/editorials. His expertise in clinical anatomy has extended for four decades, and continues through today.

Dr. Bogduk’s expertise in clinical anatomy includes the field of headache. A PubMed search using the words “Bogduk N and Headache” finds 25 citations (as of May 12, 2017). Perhaps his most important contribution to the understanding of the clinical anatomy of headache appeared in the journal Biomedicine and Pharmacotherapy in 1995. The article is titled (4):

In this article, Dr. Bogduk details the clinical anatomy of headaches, noting that “all headaches have a common anatomy and physiology,” including migraine headache. Specifically, he states:

“All headaches are mediated by the trigeminocervical nucleus.” 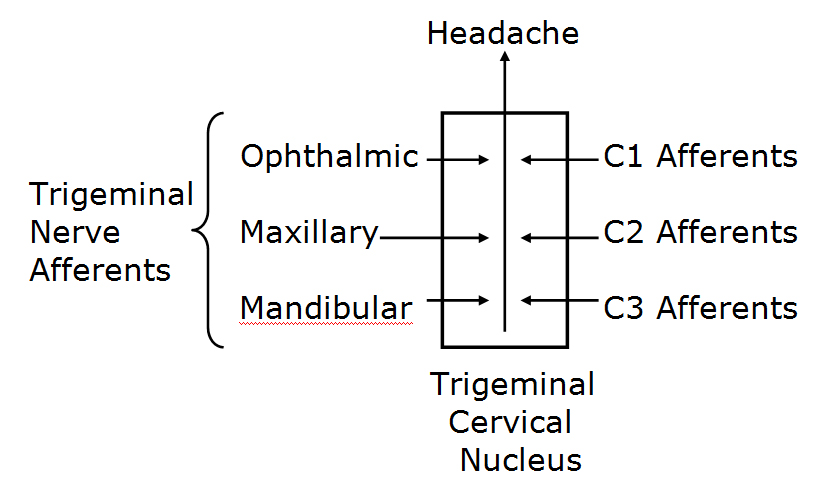 Consequently, upper cervical spine afferents to a second-order neuron that also receives trigeminal input may be a source of the electrical signal that is interpreted as headache in the brain, including migraine headache. As such, structures that are innervated by C1, C2, C3, can cause headache, including migraine. Irritation and/or inflammation of structures innervated by C1, C2, C3 can all cause headaches. Such structures include:

This article supports the clinical anatomical perspective of Dr. Bogduk. It also extends the concept for the inclusion of manual/manipulative therapy of the cervical spine in the management of chronic migraine headache.

The following year, 2015, the journal Complementary Therapies in Medicine, published a study titled (6):

“As a brief tool, the Headache Impact Test-6 is easy to score and interpret, and can be readily integrated into clinical practice, or clinical studies of migraine patients. It may offer clinicians a practical and easy-to-implement tool to assist them with evaluating treatment effectiveness by obtaining input directly from the patient on aspects other than just the frequency of headache days.”

This is a randomized controlled trial. Patients received 8 treatments over a period of 6 months. Patients were randomly divided into three groups:

The criteria considered for manipulative evaluation and treatment were:

The authors note that manipulation in migraine could reduce the release of pro-inflammatory substances that have an effect on the nociceptive nervous system. They state:

“As a consequence [of manipulation], a cascade of biological and neurological events, potentially based on a rebalance of the abnormal activation of the habituation/sensitization mechanism, even between attacks, could occur resulting in an overall improvement of clinical outcomes.”

Key findings from this study include: 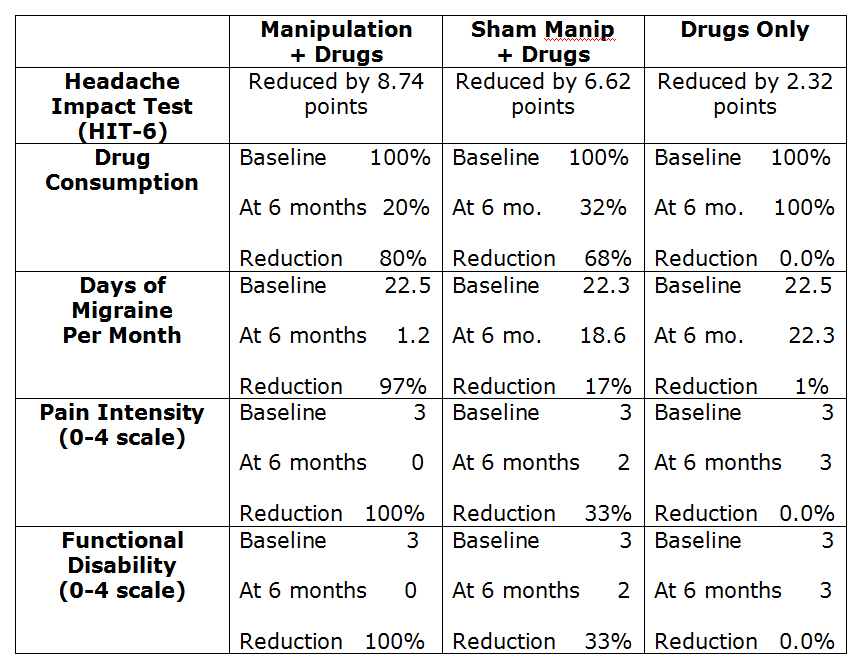 The following remarkable graph was presented in the study: 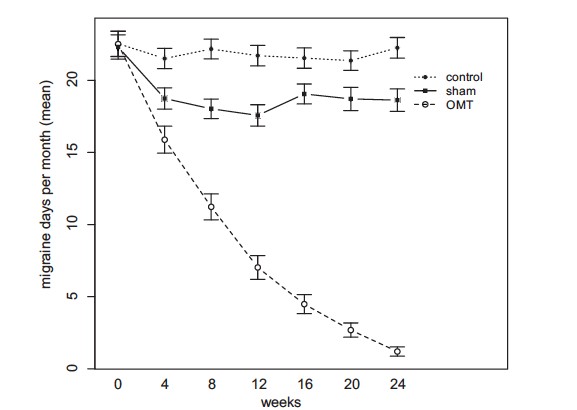 In 2017, researchers from Akershus University Hospital, Oslo, Norway, and the Department of Chiropractic, Macquarie University, NSW, Australia, published a study in the journal Musculoskeletal Science and Practice titled (8):

The primary objective of this study was to “report on all adverse events in a prospective chiropractic spinal manipulative therapy, single-blinded, placebo, randomized controlled trial for migraineurs.”
The authors note that migraines are a common worldwide challenge, and pharmacological management is often the first treatment of choice. However, migraine drugs can have serious and/or undesirable side effects. In contrast, manual-therapy is a non-pharmacological migraine treatment option that appears to have a similar effect as common drugs on migraine frequency, migraine duration, and migraine intensity.

This study prospectively reported all adverse events in a chiropractic spinal manipulative therapy randomized controlled trial. It is a prospective assessment; 70 migrainers were randomized to chiropractic manipulation (Gonstead full-spine adjusting) or a placebo, with 12 intervention sessions over three months. The subjects in this study were randomly placed into three groups:

The participants were interviewed and physically assessed by a chiropractor, “including meticulous investigation of the spinal column.” They also received a full spine radiographic examination. The subjects attended 12 intervention sessions over 12 weeks with follow-up at 3, 6 and 12 months post-treatment. The authors concluded:

“Conclusions: Adverse events [to spinal manipulation] were mild and transient, and severe or serious adverse events were not observed.”

“These findings are in accordance with the World Health Organization guidelines on basic training and safety in chiropractic spinal manipulation, which is considered to be an efficient and safe treatment modality (WHO, 2005).” (9)

This study used Gonstead analysis, full-spine x-rays, and full-spine adjusting, for patients with chronic migraines. Although this Gonstead adjusting resulted in a few adverse events, they were minor and transient. Additionally, the chiropractic adjusting had the best long-term results.

Improvement of the mechanical function of the upper cervical spine with spinal manipulation and other adjunctive mechanical interventions is effective and safe intervention for patients suffering from chronic migraine headache.