You are here: Home / Advanced / Chiropractic Manipulation for Migraine Headache: The Evidence Continues to Grow
6386
SHARES
Share on FacebookShare on Twitter
GoogleLinkedin

The total sum of suffering caused by migraine headache is higher than any other kind of headache (1). About 38 million adults in the United States are migraine sufferers, and 91% experience migraine-associated disability (2, 3, 4).

Migraine headache is often incapacitating, with considerable impact on social activities and work, and may lead to significant consumption of drugs (1). Commonly prescribed rescue medications (analgesics, ergots, triptans, and opioids) may increase the risk of medication overuse headaches, allodynia, and dependence (5).

An article appearing in the Business Section of the San Francisco Chronicle newspaper on July 20, 2014, notes that the migraine market in developed countries will grow to about $5.4 billion in 2022 (6). The author, Stephanie Lee, notes that current treatments are not very effective and they may have dangerous side effects:

“Frustrated patients often seek out opioids in the emergency room, but opioids can be dangerous. In a year, … 20,000 patients in California developed chronic migraines because of opioid overuse, and 3,000 became addicted.”

It is ironic that opioids taken for migraines cause chronic migraines in many patients. Ms. Lee concludes (6):

Approximately 40% of those with episodic migraines have unmet treatment needs, including dissatisfaction with treatment and moderate or severe headache-related disability (7). Evidence is mounting, (presented here), that chiropractic and spinal manipulation may provide a sought-after safe and effective alternative to pharmacology and reduce the incidence of unmet treatment needs.

Perhaps his most important contribution to the understanding of the clinical anatomy of headache, including migraine headache, appeared in the journal Biomedicine and Pharmacotherapy in 1995. The article is titled (8): 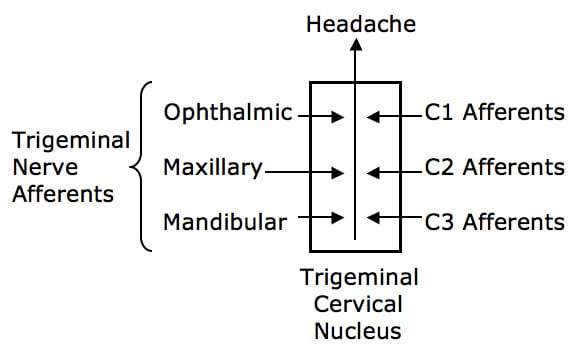 Upper cervical spine afferents may be a source of the electrical signal that is interpreted as headache in the brain, including migraine headache. Consequently, structures that are innervated by C1, C2, and C3, can cause headaches, including migraine, when irritated and/or inflamed.

In 1978, an early study was published in the Australian and New Zealand Journal of Medicine titled (9):

A Controlled Trial of Cervical Manipulation of Migraine

“For the whole sample, migraine symptoms were significantly reduced.”

“Chiropractic patients did report a greater reduction in pain associated with their attacks.”

In 2000, a study was published in the Journal of Manipulative and Physiological Therapeutics titled (10):

This randomized controlled trial was of 6 months duration. It used 127 subjects. The outcome measures used included frequency, intensity (visual analogue score), duration, disability, and use of medication for each.

The chiropractic manipulation treatment group “showed statistically significant improvement in migraine frequency, duration, disability, and medication use when compared with the control group.”

“Twenty-two percent of participants reported more than a 90% reduction of migraines as a consequence of the 2 months of spinal manipulative therapy.”

“The results of this study support previous results showing that some people report significant improvement in migraines after chiropractic spinal manipulative therapy.”

This study assessed the pain intensity and nociceptive blink reflex in 15 migraine subjects between times of symptoms with passive movements of the occipital and upper cervical spinal segments. The authors note that anatomically and neurophysiologically there is a functional convergence (see above drawing) of trigeminal and cervical afferent pathways.

This study showed that passive manual intervertebral movement between the occiput and the upper cervical spinal joints decreases excitability of the trigeminocervical nucleus. They note that manual cervical modulation of this pathway is of potential benefit in migraine sufferers. The authors concluded:

This article supports the clinical anatomical perspective of Dr. Bogduk. It also supports the concept for the inclusion of manual/manipulative therapy of the upper cervical spine in the management of migraine headaches.

In 2015, the journal Complementary Therapies in Medicine, published a study titled (12):

The authors note that manipulation in migraine could reduce the release of pro-inflammatory substances that have an effect on the nociceptive nervous system. Key findings from this study include:

In 2017, researchers from Akershus University Hospital, Oslo, Norway, and the Department of Chiropractic, Macquarie University, NSW, Australia, published a study in the journal Musculoskeletal Science and Practice titled (13):

The primary objective of this study was to report on all adverse events in a prospective chiropractic spinal manipulative therapy, single-blinded, placebo, randomized controlled trial for migraineurs.

The authors note that migraines are a common worldwide challenge, and pharmacological management is often the first treatment of choice. However, migraine drugs can have serious and/or undesirable side effects. In contrast, manual-therapy is a non-pharmacological migraine treatment option that appears to have a similar effect as common drugs on migraine frequency, migraine duration, and migraine intensity.

The subjects attended 12 intervention sessions over 12 weeks with follow-up at 3, 6, and 12-months post-treatment. The authors concluded:

In this study, Gonstead chiropractic adjusting had the best long-term clinical results.

The Impact of Spinal Manipulation on Migraine Pain and Disability:
A Systematic Review and Meta-Analysis

This study is a systematic review and meta-analysis of published randomized clinical trials to evaluate the evidence regarding spinal manipulation as an alternative or integrative therapy in reducing migraine pain and disability. The authors identified 6 randomized clinical trials eligible for their analysis that included 677 subjects. The spinal manipulations were performed by a chiropractor in 3 studies, an osteopath in 2 studies, and undetermined in 1 study.

The intervention duration ranged from 2 to 6 months, and the number of treatments ranged from 8 to 16. Outcomes included number of migraine days (primary outcome), migraine pain/intensity, and migraine disability.

The authors include a discussion pertaining to problems with pharmacology for migraine headaches and the need for non-drug approaches to the migraine issue. They note:

“The limitations to current pharmacological therapies have highlighted the need to explore alternative or integrative treatments for migraine.”

“Spinal manipulation may be an effective therapeutic technique to reduce migraine days and pain/intensity.”

“One potential non-pharmacological approach to the treatment of migraine patients is spinal manipulation, a manual therapy technique most commonly used by doctors of chiropractic.”

“In the United States, approximately 12% of patients seeking treatment from a chiropractor report headache as their chief complaint.”

Approximately 15.4% of individuals with migraines have used chiropractic care in the past 12 months.

The conclusion of this meta-analysis is that spinal manipulation had a greater impact on reducing the number of migraine days compared to controls. The authors state:

“In this meta-analysis, spinal manipulation was associated with significant reductions in migraine days compared to those in active control groups which suggests that the results seen for the intervention group are not solely due to attention or expectation.”

“Results from this preliminary meta-analysis suggest that spinal manipulation may reduce migraine days and pain/intensity.”

Importantly, the authors note that their review focused on spinal manipulation, yet they acknowledged that chiropractic clinical practice often uses a multimodal approach which may also be beneficial, including but not limited to education, spinal stabilization exercises, soft tissue manipulation, breathing training, stretching techniques, nutrition, and ergonomic modifications.

“Few adverse events were observed and none were considered serious or severe.”

Lastly, and importantly, this same group published a study in the journal Global Advances in Health and Medicine in March 2019, titled (15):

Integrating Chiropractic Care into the Treatment of
Migraine Headaches in a Tertiary Care Hospital: A Case Series

These authors are from Brigham and Women’s Hospital, Boston, and Harvard Medical School. They are specifically including chiropractic in the treatment of migraine headache. They state:

In the past decade, there has been a “rise in the number of chiropractors working collaboratively with medical practitioners and many are integrated into medical facilities, including at the Harvard Medical School Osher Center for Integrative Medicine.”

“Many medical practitioners are often unaware of the treatment approaches within the chiropractic profession and the efficacy of these approaches because chiropractors have practiced as a separate health-care system for over a century.”

“This article serves to inform medical colleagues of the scope and depth of chiropractic training and treatment and how integration of care might be beneficial to a neurology practice.”

The rationale for using chiropractic care for these migraine patients includes these points:

Chiropractors are licensed to administer nonsurgical and nonpharmacological therapies for health restoration and maintenance. The chiropractic approach to patients suffering migraine headaches may include combinations of spinal manipulative therapy, soft tissue therapies (myofascial release, massage, trigger point therapies, etc.), rehabilitation/exercises, ergonomic advice, lifestyle management, and nutritional counseling. Chiropractic has “been shown to be efficacious for a wide-range of musculoskeletal conditions including neck pain and temporomandibular pain.” The goals of chiropractic therapy are to optimize neuromusculoskeletal health and reduce the patient’s overall pain burden.

The authors present a three migraine patient case series that illustrates an integrated model of care for migraine patients that combines standard neurological care with chiropractic treatment. Each patient initially presented to a neurologist and was subsequently referred to a chiropractic colleague. A summary of the presented cases follows:

With chiropractic care, including spinal manipulation, there was a “nearly immediate reduction in headache and neck pain and a reduced headache frequency to 1 per month.”

After 9 months of chiropractic, headaches reduced to 10 per month with average pain rating of 3/10. At 10 months, she experienced her first headache free month.

Findings from the 3 presented case studies integrating neurologic and chiropractic care for the treatment of migraine included:

The authors state the most promising migraine patient candidates for integration of chiropractic care include:

“All patients reported greater therapeutic benefits with the addition of the integrative approach.”

“Our case series highlights the promise of and the need to further evaluate integrated models of chiropractic and neurologic care.”

These studies document what essentially every chiropractor has observed for more than a century:

Improvement of the mechanical function of the upper cervical spine with spinal manipulation and other adjunctive mechanical interventions is effective and safe intervention for patients suffering from migraine headache.

The benefits of chiropractic spinal manipulation is not only that it is effective and safe, but that it helps patients avoid problems associated with pharmacological treatment.

“Authored by Dan Murphy, D.C.. Published by ChiroTrust® – This publication is not meant to offer treatment advice or protocols. Cited material is not necessarily the opinion of the author or publisher.”