Pain is a huge problem in America. Approximately half of adults in America suffer from chronic pain (1).

The primary reason for the initiation of pain from the peripheral tissue is inflammation (2). Consequently, minimizing and/or treating peripheral inflammation is an important approach in pain management.

It is well understood and accepted that the pain electrical signal, on its pathway from the inflamed peripheral tissue to the (parietal) brain, also communicates with the limbic (emotional) brain. Consequently, in addition to hurting, pain also causes suffering and emotional problems, such as depression (7): 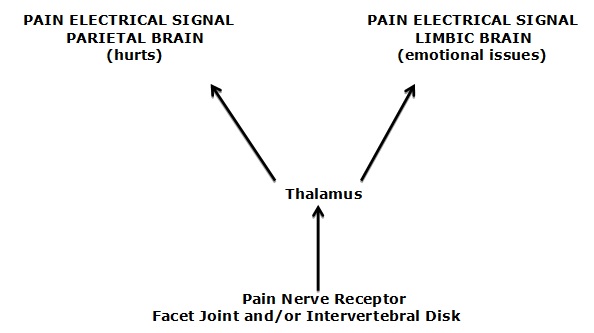 The observations that chronic pain patients also have abnormal psychological profiles have led to much controversy, centering around two questions. These questions are essentially similar to the age-old question:

What comes first, the chicken or the egg?

Does an abnormal psychological profile cause chronic pain?

Does chronic pain cause an abnormal psychological profile?

An answer to this question was provided, using primary research and gold-standard protocols by a team of well-respected researchers. Their study appeared in the journal Pain in 1997, and was titled (8):

The authors sought to evaluate:

Nine of the study subjects were treated with radiofrequency neurotomy (treatment group). Eight of the subjects (the placebo group) were similarly treated, but the machine was not turned on. 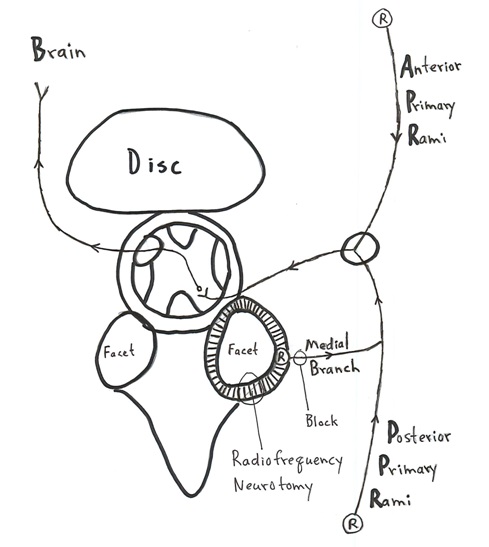 The facet joint has nociceptors “R” which are connected to the brain through the medial branches of the posterior primary rami .

Diagnostic anesthetic blocking of the medial branch of the posterior primary rami eliminated the neck pain in all 17 study subjects, indicating the facet is the source of their neck pain.

Radiofrequency neurotomy of the facet joint capsules coagulates the neurofiliment proteins, eliminating the pain in all such treated subjects.

The authors state the following:

“The association between complete relief of pain and resolution of psychological distress was very strong.”

“None of the patients received any formal psychological therapy. The only intervention was the operative procedure. Therefore, such changes in the psychological profile as were observed can only be ascribed to the neurosurgical intervention.”

The results of this study clearly refute the psychological model , which would have predicted that because no psychological intervention was administered, no patient should have exhibited improvement in either their pain or psychological status. Yet, the treated subjects exhibited complete resolution of psychological distress. The authors state:

“This result calls into question the present nihilism about chronic pain, that proclaims medical therapy alone to be ineffectual, and psychological co-therapy to be imperative.”

“In contrast, all but one of the patients whose pain remained unrelieved continued to suffer from psychological distress.”

There is no doubt or argument that chiropractic care is both scientific and helps the majority of people with spine pain syndromes. As an example, Dr. Kirkaldy-Willis was a Professor Emeritus of Orthopedics and director of the Low-Back Pain Clinic at the University Hospital, Saskatoon, Canada. In 1985 he stated (9):

“Spinal manipulation, one of the oldest forms of therapy for back pain, has mostly been practiced outside of the medical profession.”

“Over the past decade, there has been an escalation of clinical and basic science research on manipulative therapy, which has shown that there is a scientific basis for the treatment of back pain by manipulation.”

“Most family practitioners have neither the time nor inclination to master the art of manipulation and will wish to refer their patients to a skilled practitioner of this therapy.”

More recently Jon Adams, PhD, and colleagues used the National Health Interview Survey to determine the present state of chiropractic in the United States. The aim of their study was to investigate the lifetime and 12-month prevalence, patterns, and predictors of chiropractic utilization in the US general population. Their findings were published in the journal Spine in December 2017 (10).

The authors note that chiropractors use manual therapy to treat musculoskeletal and neurological disorders. They state:

“Back pain (63.0%) and neck pain (30.2%) were the most prevalent health problems for chiropractic consultations and the majority of users reported chiropractic helping a great deal with their health problem and improving overall health or well-being.”

“A substantial proportion of US adults utilized chiropractic services during the past 12 months and reported associated positive outcomes for overall well-being and/or specific health problems for which concurrent conventional care was common.”

“Many respondents reported positive outcomes of chiropractic utilization agreeing that such care had helped them to improve overall health and make them feel better (66.9%), to sleep better (41.9%), and to reduce stress or to relax (40.2%).”

“Back pain or back problems (63.2%) and neck pain or neck problems (30.2%) were by far the top specific health problems for which people consulted a chiropractor in the past 12 months, followed by joint pain/stiffness (13.6%) and other pain conditions. Around two in three users (64.5%) reported that chiropractic had helped a great deal to address these health problems.”

“Our analyses show that, among the US adult population, spinal pain and problems – specifically for back pain and neck pain – have positive associations with the use of chiropractic.”

“Chiropractic services are an important component of the healthcare provision for patients affected by musculoskeletal disorders (especially for back pain and neck pain) and/or for maintaining their overall well-being.”

Importantly, when chiropractors treated their patients for back and/or neck pain complaints, they also noted improvements in other aspects of their well-being that could be attributed to the limbic brain:

Very recently (May-June 2018), a case study was published in the Journal of Family Medicine and Primary Care , titled (11):

This article presented a case report of a 44-year-old woman who experienced long-term relief from tension-type headaches and major depression following chiropractic treatment. The report highlights the rewarding outcomes from spinal adjustments in certain neuropsychiatric disorders.

“Chronic pain and depression can influence one another through complex webs of connections.”

“Psychiatric comorbidity and suicide risk are commonly found in patients with painful physical symptoms such as chronic headache, backache, or joint pain.”

Chiropractic adjustments “may lead to some therapeutic outcomes in certain neuropsychiatric disorders.”

“Chiropractic care is a way to reduce the frequency of pain, and the duration and intensity of headaches.”

In this case study, the clinical goal of the chiropractors was to help their patient with her chronic debilitating headaches. The purpose of their publication is to share adjunct benefits of successful resolution of chronic headache from chiropractic care.

Chronic musculoskeletal syndromes have an emotional, limbic component that can manifest as psychological signs and symptoms as well as an abnormal psychological profile. Improvements in other aspects of health and well being while receiving chiropractic care for musculoskeletal pain is a welcome addition.