The Misunderstanding of an Important Player in Obesity, Arthritis, and Pain Syndromes

Scientific publications have noted for nearly seven decades that obesity increases the risk of osteoarthritis. A recent search (08/08/2013) of the US National Library of Medicine using the PubMed search engine (www.pubmed.gov) with the words “obesity AND osteoarthritis” revealed 1,310 studies. These studies spanned between 1946 and August 2013. The link between obesity and osteoarthritis is established. Greg Crister notes (4):

“A pound of extra body weight places from two to four pounds of extra stress on the knees and hips.”

“In the arthritic knee, which takes the majority of the pounding, that stress causes the cartilage to wear away, letting the exposed bone surfaces grind against one another. That brings even more swelling, pain, and difficulty in moving about in general.”

It is clear to both the public and to public health officials that there has been a significant increase in obesity rates in the United States over the past several decades. In 2012, official tabulations indicated that 69% of American adults are overweight or obese (1). Authorities predicted that these obesity rates would nearly double by 2030 (2). In our heaviest state, Mississippi, it is estimated that by 2030, 67% of adults will be obese (2). Strikingly, severe obesity rates (being more than 100 pounds overweight) are skyrocketing (3). In the United States, obesity is so prevalent that it has become “normal.”

Fructose does not trigger the production and release of insulin.

The sweet part of sucrose (common table sugar), is not the glucose, it’s the fructose. If the percentage of fructose is increased in a food choice, the product becomes sweeter. In his 2013 book Salt, Sugar, Fat (5), Pulitzer Prize winner Michael Moss notes that the taste of sweetness is innate, it is present at birth. Humans crave that taste of sweet. Newborn babies love the taste of sweet and will consume as much sweetness as they can. “Our bodies are hard-wired for sweets.” Sweetness “makes the taste of food and drink irresistible.” Sweetness is “so powerful, it could compel us to eat more than we should and thus do harm to our health.” Brain scans show that sweetness lights up our brain’s pleasure centers, creating “bliss.”

In 2004, science writer Greg Critser wrote a book titled Fat Land: How Americans Became the Fattest People in the World (4). Although obesity is multifactorial, Critser points directly at fructose as being the central player in the recent escalation of the obesity epidemic.

By the 1980s, HFCS had become the dominant sweetener in the US society. It was found in nearly all sodas, other sweetened drinks, sweet snacks, baked goods, and candies. Drink manufactures were particularly excited about HFCS because its liquid form was easily homogenized into their products.

Importantly, HFCS is metabolized differently than sugar (sucrose). HFCS arrives almost completely intact at the liver, where it is converted into triglycerides. These triglycerides alter the function of the insulin receptor on the cell membrane, thus causing the cell to become insulin resistance. When the cell is insulin resistant, these fructose-derived triglycerides are stored (as fat) rather than being burned to produce the energy required to run the human body. 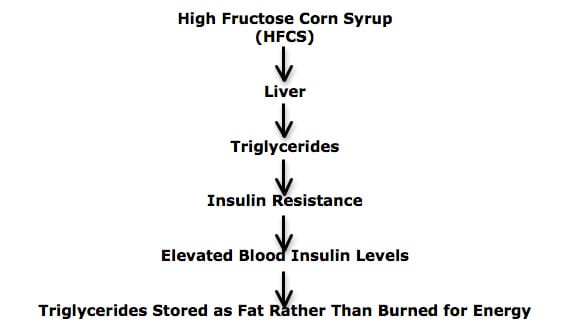 A growing number of contemporary obesity experts are questioning the status quo of “calorie in—calorie out” cause and solution to the escalating obesity epidemic. Citing the laws of thermodynamics, “calorie in—calorie out” proponents argue that obesity is the consequence of more calories going into our bodies (gluttony) than are burned during activity (sloth). The adage of these proponents is that one is obese because they eat too much and exercise too little.

The newer alternative theory is that some consumed calories cannot be burned to supply the energy that physical activities require because they are metabolically stored as fat, expanding our weight and our waistlines; and also depriving our metabolism machinery of the energy required to fuel our activities. Additionally, under specific physiological conditions, these stored fat calories cannot be accessed as a source of energy, rendering one tired and unable to perform physical activity. In other words, one is fat because consumed calories are stored as fat, and these fat-stored calories are inaccessible to supply the fuel required to perform physical activities.

Champions of this newer alternative theory include:

Gary Taubes
Educated at Harvard and Stanford, Taubes is currently a Fellow at the University of California, Berkeley. His recent writings on the obesity topic include Good Calories, Bad Calories (2008) (6), Why We Get Fat (2011) (7), and the cover article in the political magazine Newsweek (5/14/12) (8). A recent search (08/014/2013) of the US National Library of Medicine using the PubMed search engine (www.pubmed.gov) finds 124 citations by Gary Taubes.

Richard J Johnson, MD
Dr. Johnson is a physician, Professor of Medicine (University of Colorado, Denver), and a clinical scientist. He has published more than 500 papers. His recent books include The Sugar Fix (2008) (9) and The Fat Switch (2012)(10).

Robert H. Lustig, MD
Dr. Lustig is a pediatric endocrinologist at the University of California, San Francisco, where he is also a Professor of Clinical Pediatrics. His most recent book is Fat Chance, Beating the Odds Against Sugar, Processed Food, Obesity, and Disease, (2013) (11). A recent search (08/014/2013) of the US National Library of Medicine using the PubMed search engine (www.pubmed.gov) finds 105 citations by Dr. Lustig.

The physiological mechanisms for obesity expressed by these authors overlap considerably. Their common ground pertaining to obesity are:

“It is excess insulin that makes you fat and keeps you fat.” 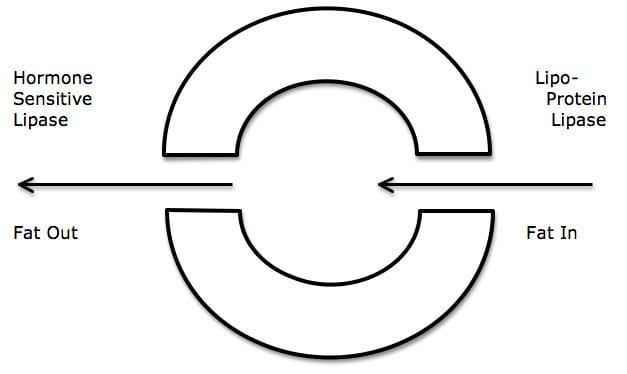 A few hundred years ago the typical American consumed 5 pounds of sugar. Today average sugar consumption is 160 pounds per American per year (13).

Although Richard Johnson, MD, is a physician (Professor of Medicine, University of Colorado, Denver), he approaches obesity from the perspective of a biological anthropologist. In his 2012 book The Fat Switch (10), Dr. Johnson reviews the common denominators in a number of different hibernating animals that must become fat to ensure survivability prior to their long rest, and compares them to the human obesity experience. He concludes that the “fat switch” is fructose. Dr. Johnson makes these points:

Dr. Johnson argues that fructose is the “fat switch” not only as a consequence of its calories, but also because of its metabolic effects that cause leptin resistance and its triglyceride production that causes insulin resistance. He states:

“Fructose is distinct from other foods in that it activates the fat switch that preferentially shunts the food we eat into fat. By activating the switch, obesity results from both an increase in food intake and a decrease in physical activity. The law of thermodynamics holds. However, unlike classical thinking, obesity occurring in response to fructose is not due to the animal choosing to eat too much or deciding to exercise too little. Rather, the switch is signaling the animal to eat too much and to exercise too little.”

Dr. Robert Lustig presents a unique perspective. As a pediatric endocrinologist, he notes that when pituitary gland tumors are successfully destroyed, often the child will gain significant weight, even when placed on a severely calorie restricted diet. Destruction of the pituitary gland influences the pancreas in such a manner that it produces massive quantities of insulin, triggering the fat storage mechanism. Administration of a drug that reduces the pancreatic production of insulin to normal levels will quickly cause significant weight loss, even though the calorie consumption remained unchanged.

Dr. Lustig notes that the villain of his story is sugar (sucrose, half glucose and half fructose), stating it’s a “substance that now permeates nearly all food and drink worldwide.” He further states:

“Every successful diet in history restricts sugar. Sugar is, bar none, the most successful food additive known to man. When the food industry adds it for ‘palatability,’ we buy more. And because it’s cheap, some version of sugar appears in virtually every processed foodstuff now manufactured in the world. Sugar, and specifically fructose, is the Lex Luthor of this story.”

“To blame obesity on the obese is the easy answer, but it is the wrong answer. The current formulation of gluttony and sloth, diet and exercise, while accepted by virtually everyone, is based on faulty premises and myths that have taken hold in the world’s consciousness.”

“Our consumption of fructose has doubled in the past thirty years and has increased sixfold in the last century.” “If it’s sweet, and it’s caloric, it’s fructose. Period.”

“There is no energy storage without insulin.” “Insulin makes fat—the more insulin, the more fat. And there it sits…and sits…as long as there is insulin around.”

“The fructose component [of sugar] is a toxin by itself.” “Every single disease or condition of the metabolic syndrome is driven by fructose, including hypertension, through increases in uric acid; high triglycerides and insulin resistance, through synthesis of fat in the liver; diabetes, via increased liver glucose production combined with insulin resistance; accelerated aging, due to damage to lipids and protein; likely cancer, due to DNA damage, high insulin levels, and the fact that some cancers seem to use fructose preferentially for energy; and likely dementia, through insulin resistance in the brain.”

The sweet taste sensation is innate from birth. The primary driver of sweet is fructose. The main problem with fructose is that it leads to leptin resistance and consequently to lack of satiety. No matter how strong-willed a person is, the hunger signal is stronger and will eventually prevail. When one eats, the “bliss point” is best achieved by consuming combinations of salt, sugar and fat, perpetuating addiction, insulin resistance, and lack of satiety, creating a feedback loop.

Even modest loss of weight significantly helps in the management of our musculoskeletal patients. 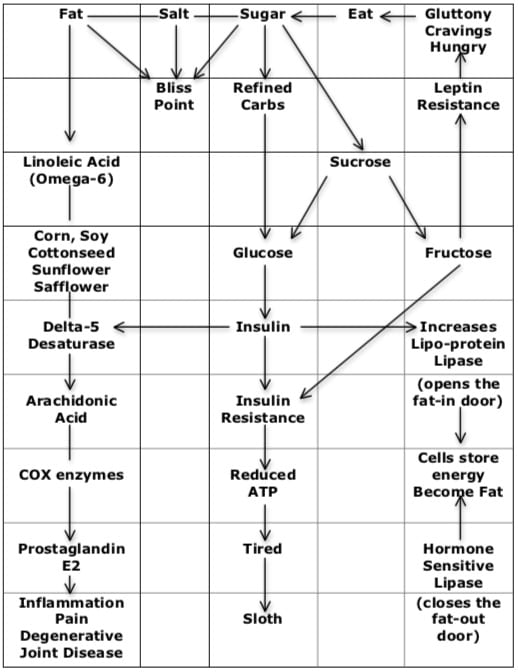 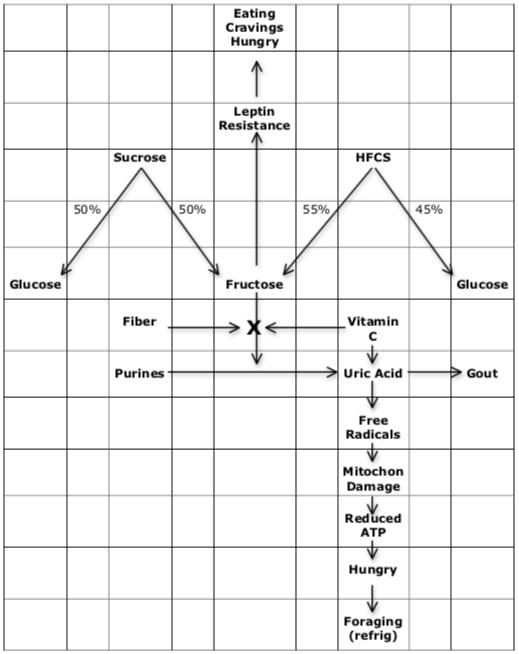