You are here: Home / Advanced / Headache Symptoms & The Commonly Overlooked Connection To The Cervical Spine
421
SHARES
Share on FacebookShare on Twitter
GoogleLinkedin

Understanding that cervical spine problems can cause headache is not a new understanding, yet is still all too often overlooked. In 1956, Emil Seletz, MD… a noted Beverly Hills, CA, neurosurgeon. He was member of the esteemed faculty at the University of California, Los Angeles, medical school, and had treated more than 20,000 injury patients at the Los Angeles General Hospital. In January of 1957, Dr. Seletz published in the Journal of the International College of Surgeons an article titled (1):

Craniocerebral Injuries and the Postconcussion Syndrome

“Analysis of the symptoms of several thousands of such patients will reveal that headaches persisting for months or years after a cerebral concussion are real and that they are extracranial in origin.”

He states that there are three primary extracranial sources for these post-traumatic headaches:

2) Elements of the trigeminal nerve.

3) A combination of the two.

In every whiplash injury, the head is involved in sudden acceleration or deceleration, causing some unnatural movement, rotation or strain of the upper cervical spinal roots and muscles.

The 2nd cervical nerve root becomes the greater occipital nerve and supplies the major portion of the scalp, the upper portion of the neck and portions of the face. [PICTURE #1] 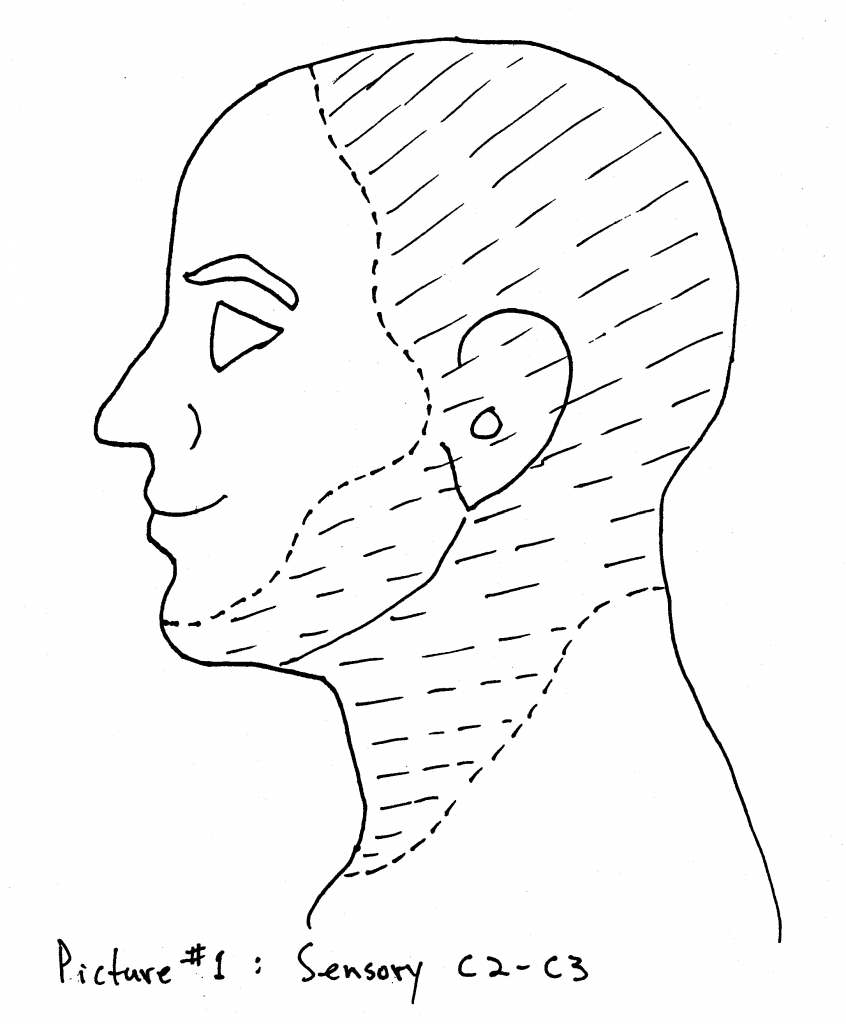 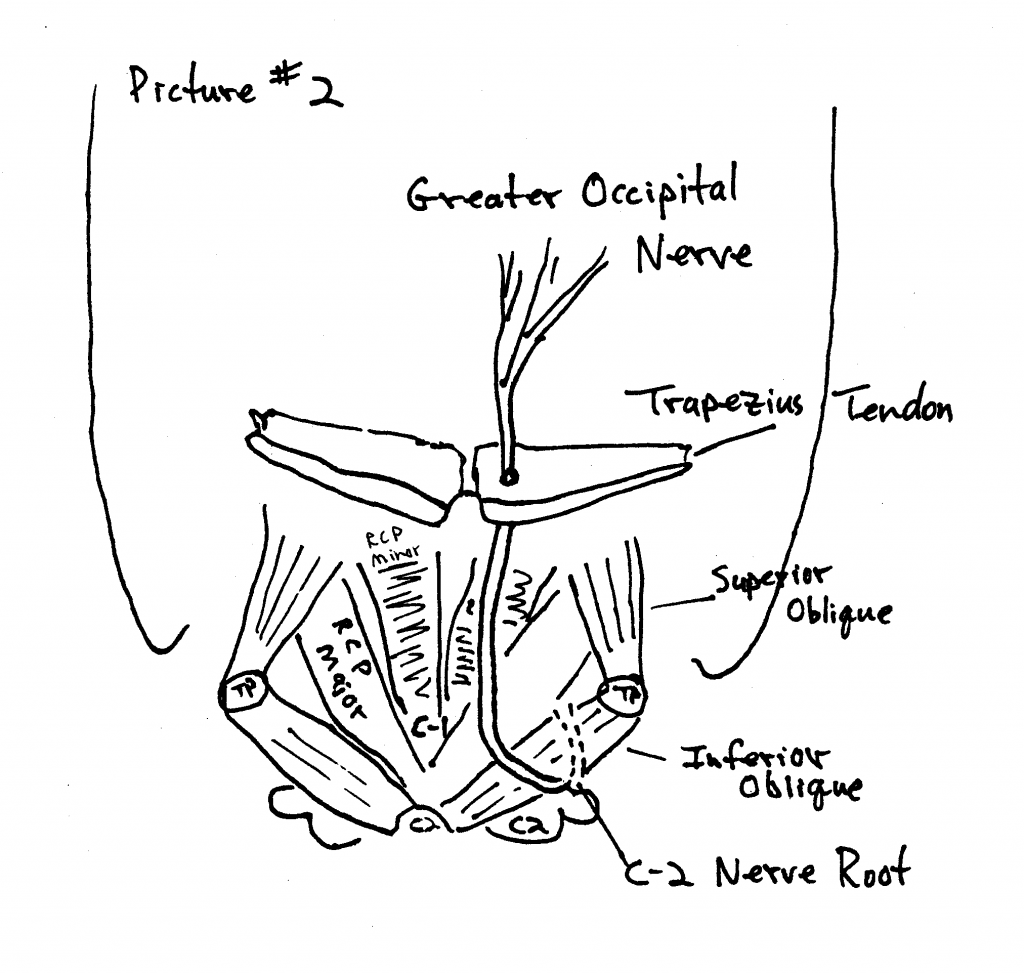 The spinal accessory nerve takes its origin from the entire length of the cervical cord, always as low as the fifth and often as low as the seventh cervical level (see drawing below). Any acute flexion, extension or torsion of the neck will exert traction on the delicate filaments of the spinal accessory nerve, resulting in spasm of the trapezius and sternocleidomastoid muscles. When the trapezius and suboccipital muscles (especially the inferior oblique muscle) are in spasm, traction is produced upon the greater occipital nerve as it pierces the fascial attachment of these muscles. 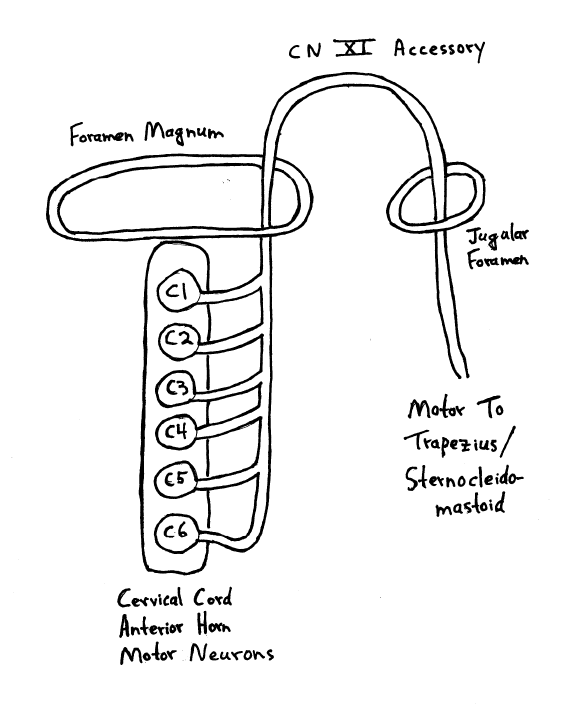 Sensory changes extending over the trigeminal innervation area following whiplash injury to the neck are explained by the communication between the 2nd and 3rd cervical nerve roots and the greater occipital nerve with the trigeminal nerve in the spinal fifth tract in the medulla (trigeminal cervical nucleus). [PICTURE #3] This has been called the greater occipital/trigeminus syndrome, and is a cause of post-whiplash headache. As the ophthalmic fibers descend the deepest into the cervical spine, the headaches are often in the distribution of the ophthalmic branch of cranial nerve V (around and behind the eye). 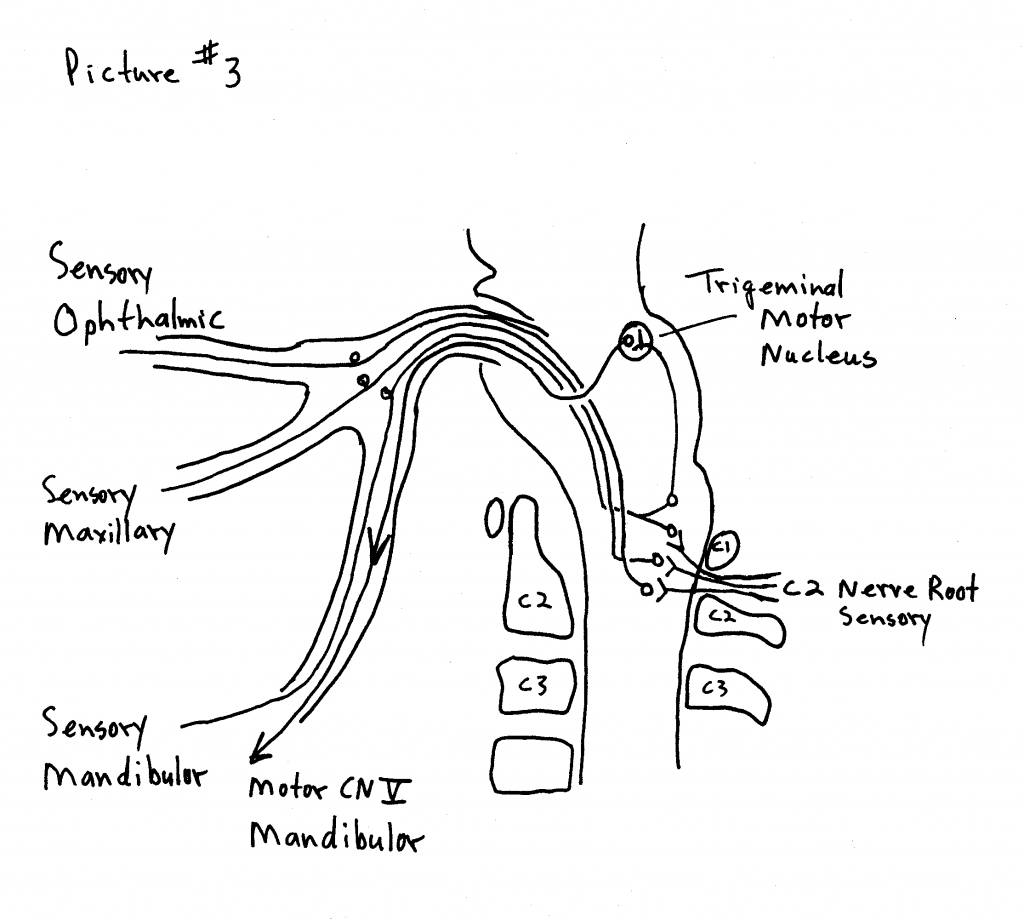 Following his 1957 publicaton on the subject of craniocerebral injury he was back in 1958 with yet another contribution, this time discussing the cervical spine and its involvement in injuries, Dr. Seletz publishes an article in the Journal of the American Medical Association, titled (2):

Once again, Dr. Seletz states that whiplash trauma results in “direct trauma to the spinal accessory nerve and to the roots of the cervical nerves.” He states:

“A major portion of the headaches associated with this syndrome are derived from a traction injury to the second cervical nerve root.”

“The physiological communication between the second cervical and the trigeminal nerves in the spinal fifth tract of the medulla [trigeminal-cervical nucleus] involves the first division of the trigeminal nerve [opthalamic] and thereby gives attacks of hemicrania with pain radiating behind the corresponding eye. This is the mechanism whereby a great many chronic and persistent headaches have their true origin in injury to the second cervical nerve,” noting:

“‘Many headaches are not headaches at all, but really a pain in the neck.’”

Although Dr. Seletz expertly described the neuroanatomical basis for headaches arising from the cervical spine in the late 1950’s, it took nearly a quarter of a century for officials to include the category “Cervicogenic Headache” in their classification schemes (3). Additions to Dr. Seletz’s concepts on cervicogenic headache continue through today. A recent (August 2008) PubMed search of the National Library of Medicine database using the key words “cervicogenic headache” listed 588 articles, with publication dates ranging from 1949 to 2008.

Perhaps the most detailed anatomical description for the physiological basis for cervicogenic headache was written by Australian physician and researcher Nikoli Bogduk, MD, PhD, in 1995. Dr Bogduk published an article in the journal Biomedicine and Pharmacotherapy titled (4):

In this article, Dr. Bogduk notes that all headaches have a common anatomy and physiology in that they are all mediated by the trigeminocervical nucleus, and are initiated by noxious stimulation of the endings of the nerves that synapse on this nucleus or by irritation of the nerves themselves. The trigeminocervical nucleus is a region of grey matter in the brainstem.

The trigeminocervical nucleus is “defined by its afferent fibers,” and it receives afferents from the following sources:

Dr. Bogduk indicates that because the ophthalmic branch of the trigeminal nerve extends the farthest into the trigeminocervical nucleus, cervical afferent stimulation is most likely to refer pain to the frontal-orbital region of the head. Yet, importantly, any structure innervated by any of the three branches (ophthalmic, maxillary, mandibular) of cranial nerve V (trigeminal) can be painful as a consequence of irritation of any of the structures innervated by the C1, C2, and/or C3 nerve roots. The following lists are helpful:

Dr. Bogduk agrees with the writings from Dr. Seletz decades before in that the C1 and C2 nerve roots are particularly likely to be involved in the genesis of cervicogenic headache because the C1 and C2 spinal nerve roots “do not emerge through intervertebral foramina.” This make these nerve roots more vulnerable to stretch or compressive stresses. Additionally, Dr. Bogduk also agrees with Dr. Seletz in noting that the sensory component of the C2 posterior primary rami becomes the greater occipital nerve. C2 winds under the inferior oblique muscle, ascends and pierces the shared aponeurosis of the trapezius and sternocleidomastoid muscle to supply the posterior scalp.

Two other clinically relevant points
Dr. Bogduk makes in this article include:

1) Arthritic changes of the upper cervical synovial joints (including C2-C3) can cause neck pain and headache.

2) C2 neuralgia can cause headache as a consequence of “scar tissue following trauma to the lateral atlanto-axial joint.”

In 2005, adding to the more recent data on this topic, Dr. David Biondi, an instructor in Neurology Harvard Medical School, published an article titled (5):

Cervicogenic Headache:
A Review of Diagnostic and Treatment Strategies

In this article, Dr. Biondi makes the following key points:

In addition to these points, Dr. Biondi notes that in the management of cervicogenic headache, drugs alone are often ineffective. He states that “Many patients with cervicogenic headache overuse or become dependent on analgesics.” He also notes that COX-2 inhibitors cause both gastrointestinal and renal toxicity after long-term use, and they cause an increased risk of cardiovascular and cerebrovascular events.

Dr. Biondi is an osteopathic physician, and therefore has an understanding of manual and manipulative techniques. He states:

“All patients with cervicogenic headache could benefit from manual modes of therapy and physical conditioning.”

THE PATIENT MUST HAVE AT LEAST ONE OF THE FOLLOWING:

If All Three Criteria Are Present, One Is Essentially Assured of Cervicogenic Headache

Unilateral Headache That Does Not Change Sides

Occasionally the Pain May Be Bilateral

The Pain is Located Occipitally, Frontally, Temporally, or Orbitally

The Pain Can Last Hours to Days

The Headache Usually Begins in the Neck

The Headache is Moderate to Severe

THE FOLLOWING FEATURES
MAY ALSO BE OCCASIONALLY NOTED