You are here: Home / Advanced / Headaches and the Neck “Cervicogenic Headaches” and Treatment with Spinal Manipulation
6841
SHARES
Share on FacebookShare on Twitter
GoogleLinkedin

For decades, clinicians have realized that neck problems can cause headaches. For example, early whiplash expert and orthopedic surgeon, Ruth Jackson, MD (1902-1994), published a study in 1947 in the Journal of the American Medical Women’s Association titled (1):

The Cervical Syndrome As a Cause of Migraine

Craniocerebral Injuries and the Postconcussion Syndrome

In this article, Dr. Seletz notes that many patients who suffer neck injury will develop incapacitating severe headaches that may persist for months or even years. He claims that the cause of the headache is injury to the 2nd cervical nerve root, explaining that the C2 nerve root communicates with the trigeminal nerve (cranial nerve V) in the lower brainstem and in the upper cervical spinal cord. He notes that these headaches are often severe, begin in the suboccipital area and radiate to the vertex of the skull or to behind one eye; or they may be located in the frontal or temporal region. He believes that the most probable source for these headaches is the upper cervical spinal nerve roots. Dr. Seletz states:

“Analysis of the symptoms of several thousands of such patients will reveal that headaches persisting for months or years after a cerebral concussion are real and that they are extracranial in origin.”

“The 2nd cervical nerve root is more vulnerable to trauma than other nerve roots because it is not protected by pedicles and facets.”

In this article, Dr. Seletz continues to discuss the neuroanatomical relationships between the cervical spine, especially the C2 nerve root, and headaches. Dr. Seletz notes that the cervical intervertebral foramina, although appearing roomy, are constricted by cartilage, by the vertebral artery, and by the lateral intervertebral joints, also known as the uncinate processes. Osteophytes, swelling or adhesions in this constricted intervertebral foramina space almost inevitably causes painful vascular or neural disorders that can lead to headache.

A recent human study confirms that these joints of Von Luschka are synovial joints with a joint capsule and innervated with pain afferents (5). This study states that the uncinate process joint is:

“A synovial or diarthrodial joint must exhibit a joint capsule, a synovial membrane, synovial fluid, and articular cartilage.”

“Our present findings support the notion that the uncovertebral complex includes a synovial joint.”

The following year, 1958, Dr. Seletz published yet another paper on the topic of neck injury and headache. It was published in the Journal of the American Medical Association, and titled (6):

In this article, Dr. Seletz continues to review similar neuroanatomical relationships, pathoanatomy, and pathophysiology that can cause headaches. Once again Dr. Seletz emphasizes the importance of the C2 nerve root in headache. He states:

“The physiological communication between the second cervical and the trigeminal nerves in the spinal fifth tract of the medulla [trigeminal-cervical nucleus] involves the first division of the trigeminal nerve [ophthalmic] and thereby gives attacks of hemicrania with pain radiating behind the corresponding eye.”

“Many headaches are not headaches at all, but really a pain in the neck.”

In spite of these studies fully describing cervical spine dysfunction, pathology, and/or injury as causing headache in the 1940s and 1950s, official recognition of “Cervicogenic Headache” did not occur until 1983. That article, published in the journal Cephalagia, was titled (7):

This study listed the diagnostic criteria for cervicogenic headache as:

The understanding of the anatomical basis for headache was advanced significantly when Australian physician and clinical anatomist Nikoli Bogduk, MD, PhD, in 1995, published an article in the journal Biomedicine and Pharmacotherapy titled (8): 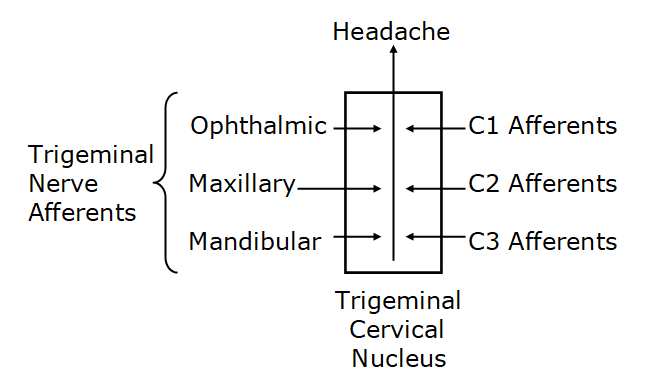 In 2001, Dr. Bogduk wrote an article pertaining specifically to cervicogenic headache. It was published in the journal Current Pain and Headache Reports, and titled (9):

In this article, Dr. Bogduk makes these points:

“Cervicogenic headache is pain perceived in the head but referred from a primary source in the cervical spine.”

“The physiologic basis for this pain is convergence between trigeminal afferents and afferents from the upper three cervical spinal nerves.”

“The possible sources of cervicogenic headache lie in the structures innervated by the C1 to C3 spinal nerves, and include the upper cervical synovial joints, the upper cervical muscles, the C2-3 disc, the vertebral and internal carotid arteries, and the dura mater of the upper spinal cord and posterior cranial fossa.”

“Experiments in normal volunteers have established that the cervical muscles and joints can be sources of headache.”

A recent (October 2017) PubMed search of the National Library of Medicine database using the key words “cervicogenic headache” listed 1,168 citations, with publication dates ranging from September 1942 to October 2017. Numerous studies have documented the effectiveness of manual therapy and manipulation in the treatment of cervicogenic headache. Three recent studies (2016 and 2017) are reviewed here:

In February 2016, a team of eleven experts from the United States and Europe published a study in the journal BMC Musculoskeletal Disorders, titled (10):

Upper Cervical and Upper Thoracic Manipulation Versus Mobilization
and Exercise in Patients with Cervicogenic Headache:
A Multi-center Randomized Clinical Trial

The authors note that the purpose of this study was to compare the effects of manipulation to mobilization and exercise in individuals with cervicogenic headache, claiming that this is the first study to directly do so.

The treatment period was 4 weeks with follow-up assessment at 1 week, 4 weeks, and 3 months after the initial treatment session. The study results and conclusions include:

“Individuals with cervicogenic headache who received both cervical and thoracic manipulation experienced significantly greater reductions in headache intensity and disability than those who received mobilization and exercise at a 3-month follow-up.”

“Additionally, patient perceived improvement was significantly greater at 1 and 4-week follow-up periods in favor of the manipulation group.”

“Six to eight sessions of upper cervical and upper thoracic manipulation were shown to be more effective than mobilization and exercise in patients with cervicogenic headache, and the effects were maintained at 3 months.”

“The results of the current study demonstrated that patients with cervicogenic headache who received cervical and thoracic manipulation experienced significantly greater reductions in headache intensity, disability, headache frequency, headache duration, and medication intake as compared to the group that received mobilization and exercise; furthermore, the effects were maintained at 3 months follow-up.”

The manipulation group experienced significantly reduced duration and frequency of headaches as well as perceiving greater improvement. These findings indicated that high-velocity, low-amplitude manipulation was more effective at treating cervicogenic headache than slow rhythmic mobilization techniques used as an intervention.

The following month, March 2016, a second study comparing cervical mobilization to manipulation in the treatment of cervicogenic headache was published. The authors are from Georgia State University, Atlanta, GA, USA. The study was published in the journal Frontiers in Neurology, and titled (11):

Mobilization and Manipulation of the Cervical Spine
in Patients with Cervicogenic Headache:
Any Scientific Evidence?

The purpose of this article was to investigate the effects of cervical mobilization and manipulation on pain intensity and headache frequency, compared to traditional physical therapy interventions in patients diagnosed with cervicogenic headache. The authors found 10 studies that met their stringent inclusion criteria, with a total of 685 subjects. “Seven of the 10 studies had statistically significant findings that subjects who received mobilization or manipulation interventions experienced improved outcomes or reported fewer symptoms than control subjects.” This article makes these points: 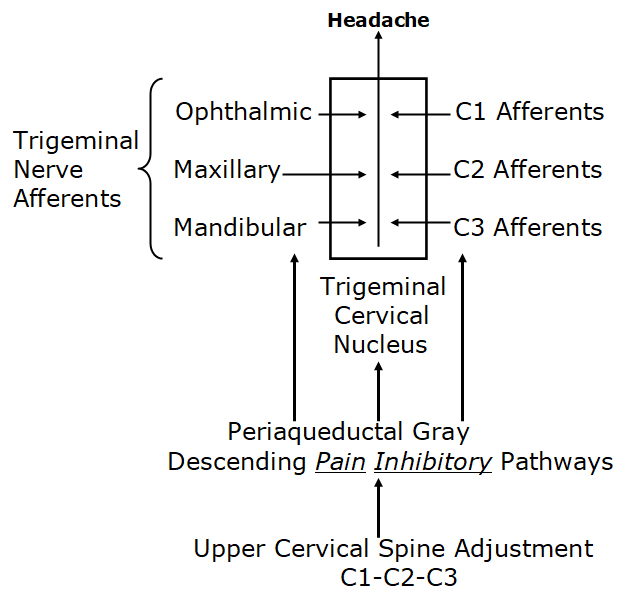 Spinal manipulation of the upper cervical spine activates the Descending Pain Inhibitory pathway through the Periaqueductal Grey of the midbrain.

The final study reviewed here specifically looked at chiropractic manipulative therapy for the treatment of cervicogenic headache. The authors were from Akershus University Hospital, Norway; the University of Oslo, Norway; Innlandet Hospital, Norway; Macquarie University, Sydney, Australia. Their article was published in July 2017, in the journal BioMed Central (BMC) Research Notes, and titled (12):

The purpose of this study was to investigate the efficacy of chiropractic spinal manipulative therapy versus placebo (sham manipulation) and control (continued usual but non-manual management) for cervicogenic headache. It is a single-blinded, placebo, randomized controlled trial of 17 months’ duration. Twelve participants were randomized to three groups:

The authors note that cervicogenic headache is a disabling headache where pharmacological management has limited effect. In fact, they state:

In this study, the Gonstead spinal adjusting was significantly superior to the sham thrusts placebo intervention and to pharmacology. The authors state:

“Headache frequency improved at all time points in the chiropractic spinal manipulative therapy and the placebo group.”

“Our main results demonstrate reduction in headache frequency and headache index in the chiropractic spinal manipulative therapy and the placebo group, an effect that lasted at follow-up, while the control group was unchanged throughout the randomized controlled trial.”

“Our results suggest that manual-therapy might be a safe treatment option for participants with cervicogenic headache.”

“Due to insufficient pharmacological treatment strategies, spinal manipulative therapy has been recommended as a treatment option.”

This is an important and impressive study, especially for chiropractic spinal manipulation and the Gonstead technique.

A related addition would be to discuss differences in outcomes of chiropractic manipulation for cervicogenic headache based upon assessment of frequency of spinal manipulation. A study in 2004 addressed the subject, and is titled (13):

Specifically, this study looked at the relationship between treatment frequency and patient outcomes for subjects receiving one, three, or four chiropractic treatments per week. The study found:

The summary of these studies, from 1947-2017 (70 years) indicates that neck problems can cause headaches and that spinal manipulation is both safe and effective in the treatment of these cervicogenic headaches.