You are here: Home / Advanced / How The Low Back Functions and How to Avoid Back Problems
6376
SHARES
Share on FacebookShare on Twitter
GoogleLinkedin

Low back pain is one of the most thoroughly investigated health problems worldwide, yet both prevention and effective treatment are elusive and controversial. The National Library of Medicine of the United States displays nearly 25,000 articles when the key words “low back pain” are used (May 2014).

Suffering with low back pain is almost a universal human experience. The United Stated Government’s National Institutes of Health (NIH) has the National Institute of Neurological Disorders and Stroke, which has a Low Back Pain Fact Sheet (1). The Fact Sheet makes the following key points:

Global Spinal Anatomy
The Compromise Between Movement and Strength

The strongest structure is a column. This is why engineers use columns to support bridges and buildings. However, a column is a poor design for the spine because columns limit motion (like turning and bending).

The most efficient structure for allowing movement is a 90° lever, like a lug-wrench.

The spinal “column” is a compromise between strength (straight column) and mobility (90° lever), with a series of three curves of about 45° each. Without these curves, spinal motion would be extremely difficult. These curves are physiologically important and considered to be normal.

Consequently, from the side, the spinal “column” should have three curves. From behind, the spine should be straight. 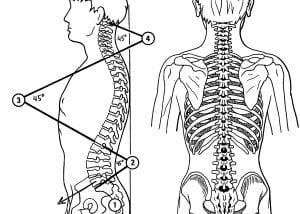 To further enhance spinal mobility, the spinal “column” is compromised of 24 individual segments, called vertebrae, each with a small degree of normal motion in multiple directions. Collectively, these small amounts of motion add up to our significant spinal flexibility. 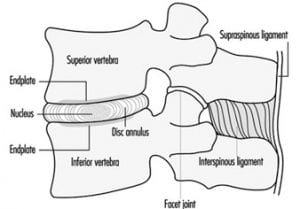 The individual vertebrae of the motor unit are held together by ligaments and by the intervertebral disc, or simply “disc.”

The intervertebral disc (disc) requires more discussion. The disc has two components. The center of the disc is called the Nucleus Pulposus, or simply “nucleus.” The nucleus is mostly water and functions as a ball bearing, allowing the vertebrae to bend and twist.

The nucleus is surrounded by tough outer fibers called the Annulus Fibrosis, or simply “annulus.” 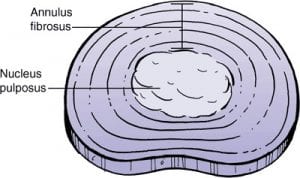 Importantly, the fibers of the annulus are arranged in layers, and each layer is crossed in opposite directions. During disc rotational movements, half of the annular fibers become tense, and the other half become lax. Rotational stress applied to the annulus is resisted by only half of the annular fibers. The disc is operating at only half strength during rotationally applied stress, increasing its vulnerability to injury. The disc is weakest during rotation. It is the integrity of the disc that is most responsible for the health of the spine. 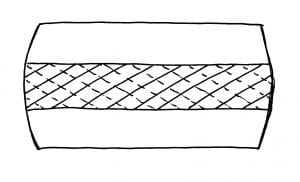 The vertebral body of the spine is designed to bear our weight. Consequently, the size of the vertebral body increases with each lower vertebrae, from the neck to the low back, to handle the increased weight. The disc, existing between adjacent vertebral bodies, also must bear the same weight. Yet, the disc is not made of bone and is consequently weaker. Also, the disc must be flexible, allowing for our bodily motions.

The last low back (lumbar) disc, known as the L5 disc, bears the most weight, and hence is most vulnerable to weight-bearing stress. After L5, our weight is split to go down both of our legs. 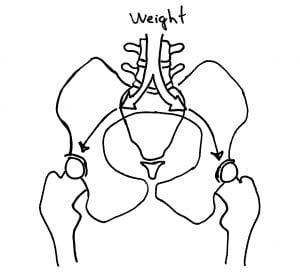 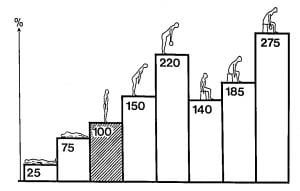 The Inclined Plane of L5

In the reference text The Physiology of the Joints, former Chief of Clinical Surgery at the Hospital of Paris, IA Kapandji, states (4):

“The lumbo-sacral joint is the weak link in the vertebral column.”

When a block is on an inclined plane, the vertical force of gravity (G) is broken into two vectors: 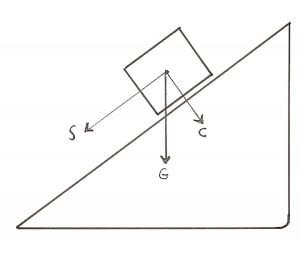 Where Does Back Pain Come From?

The modern era in the understanding of low back pain began in 1976 when internationally respected orthopedic surgeon Alf Nachemson published his detailed review (136 references) in the new journal SPINE, titled (3):

The Lumbar Spine: An Orthopaedic Challenge

Based in part on his intradiscal pressure studies, Dr. Nachemson notes that 80% of us will experience low back pain at some time in our life. He further notes that:

“The intervertebral disc is most likely the cause of the pain.”

In 1981, anatomist and physician Nikoli Bogduk published an extensive review of the literature on the topic of disc innervation, along with his own primary research, in the prestigious Journal of Anatomy (6). Dr. Bogduk notes:

“In the absence of any comprehensive description of the innervation of the lumbar intervertebral discs and their related longitudinal ligaments, the present study was undertaken to establish in detail the source and pattern of innervation of these structures.”

“The lumbar intervertebral discs are supplied by a variety of nerves.”

“Clinically, the concept of ‘disc pain’ is now well accepted.”

“The lumbar intervertebral discs are innervated posteriorly by the sinuvertebral nerves, but laterally by branches of the ventral rami and grey rami communicantes.”

“The distribution of the intrinsic nerves of the lumbar vertebral column systematically identifies those structures that are potential sources of primary low-back pain.”

“Persistent pain in the back with referred pain to the leg is largely on the basis of abnormalities within the disc.”

“In summary, what is the answer to the question of where is the pain coming from in the chronic low-back pain patient? I believe its source, ultimately, is in the disc.”

In 1991, primary research by Dr. Stephen Kuslich and colleagues was published in the journal Orthopedic Clinics of North America (9). The authors performed 700 lumbar spine operations using only local anesthesia to determine the tissue origin of low back and leg pain, and they present the results on 193 consecutive patients studied prospectively. Their findings included:

“Back pain could be produced by several lumbar tissues, but by far, the most common tissue or origin was the outer layer of the annulus fibrosis.”

Beginning with the work of Nikoli Bogduk and others over the past three decades, there has been a growing acceptance that the annulus of the disc is innervated with pain afferents and the annulus of the disc is the most probable source for low back pain. There was also 100% agreement that the nerves were only found in the annulus, and that the nucleus was aneural. However, an important addition to these concepts arose in 1997.

In 1997, AJ Freemont and colleagues published a study in the journal Lancet, titled (10):

Nerve ingrowth into diseased intervertebral disc in chronic back pain

Using samples of the intervertebral discs from 38 humans, these authors were able to show that when the disc degenerates, the nerves in the annulus can migrate into the nucleus. Histologically, these nerves in the nucleus were judged to be pain afferents. Thus the nucleus itself could be a source of discogenic pain. These authors used these anatomical findings to explain why low back pain can be so chronic, and continue to add to the evidence that the disc is the primary source of low back pain.

Later in 1997, in the journal Spine, another study was published on the topic of nucleus innervation, and titled (11):

The authors, in agreement with Freemont and colleagues, also found nerves in the nucleus of human subjects with disc degeneration.

There has been mounting evidence, for decades, that the disc has pain nerves, allowing the disc to be the primary source of low back pain. The disc also has unique susceptibility to injury, stress, and inflammation, initiating the pain cascade: