The strict definition of migraine headache is (8):

The headline appearing in the Business Section of the San Francisco Chronicle newspaper on July 20, 2014, was alarming (1):

Huge Headache of a Problem

Author Stephanie Lee notes that 36 million Americans suffer from migraine headaches. The migraine market in developed countries will grow to about $5.4 billion in 2022. The problem is that current treatments are not very effective and they may have dangerous side effects. Ms. Lee notes (1):

Chronic migraine is defined as a severe headache that occurs at least 15 times per month. It is ironic that opioids taken for migraines cause chronic migraines in so many patients. Ms. Lee concludes (1):

Morphine is the main chemical found in opium. Morphine is the gold standard of pain relieving drugs. It has been used for centuries, and medicine embraced it starting in 1817. It has been known for decades that morphine inhibits even the worst types of pain. In World War II, medics routinely administered morphine for horrific injuries to soldiers.

Endorphins are chemicals made in our bodies that also inhibit pain. Endorphin literally means “the morphines within.”(6) Endorphins suppress pain by binding to a receptor, called the opiate receptor.

The understanding of pain was advanced significantly in 1972 when graduate student Candace B. Pert discovered the brain’s opiate receptor. At the time, Ms. Pert was a graduate student working in the laboratory of Solomon Snyder, Ph.D., at Johns Hopkins University School of Medicine.

Ms. Pert’s paper on the opiate receptor was published the following year, in 1973, in the journal Science, and titled (2):

In 1974 Candace Pert earned a Ph.D. in pharmacology. In 1978, Dr. Pert’s co-author, Dr. Solomon Snyder, was awarded the prestigious Lasker Award for their work, overlooking Dr. Pert’s contribution, even though she was the paper’s primary author. Dr. Pert was angered by the oversight, and wrote about the experience in her 1997 book Molecules of Emotion (3). Despite the Lasker award slight, Dr. Pert’s career flourished, and she became one of the most important neuroscientists of history (d. 2013).

It was soon acknowledged that the spot most densely packed with opiate receptors was at the top of the brainstem, the periaqueductal gray matter of the mesencephalon (midbrain). The periaqueductal gray was considered to be the primary sight for pain control anywhere in the body. Initially, stimulating the periaqueductal gray chemically (with opioid drugs or electrically) was shown to suppress pain. Later, attention was turned to modalities such as acupuncture, massage, and spinal manipulation. 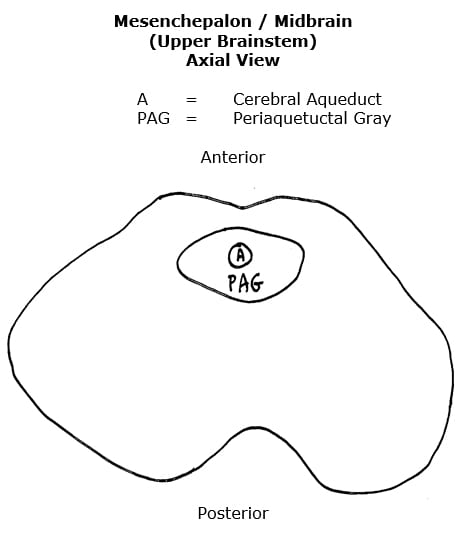 The pioneering paper using electrical stimulation of the periaqueductal gray matter to suppress pain was published in 1977 in the journal Science, and titled (4):

This paper is nicely reviewed by neurobiologists Richard Restak, MD, in his 1979 book titled The Brain, The Last Frontier (5):

“Within the periaqueductal gray, a deep-seated brainstem area lying along the floor of the third ventricle, neurosurgeons at the University of California in San Francisco placed indwelling stimulating electrodes for pain relief in six patients afflicted with chronic, unremitting pain. Whenever the patients began to experience pain, they were able to shut it off via the activation of a battery-operated stimulator about the size of a pack of cigarettes. After activating the stimulator, all six patients—in accordance with earlier findings in other pain patients—    experienced dramatic, long-lasting, and repeatable pain relief.”

“In order to test the hypothesis that pain relief was genuine and not just an example of a ‘placebo response,’ one patient was outfitted with a stimulator containing a ‘dead’ battery. The patient, a fifty-one-year-old woman with severe back and leg pain caused by cancer of the colon, anxiously reported that her pain had returned and the stimulator ‘wasn’t working.’ Replacement of a new battery led to immediate pain relief.”

Contemporary neurology reference texts detail the importance of the opiate receptor and the periaqueductal gray matter in pain control (6, 7, 8, 9, 10, 11). In general, they describe this sequence: 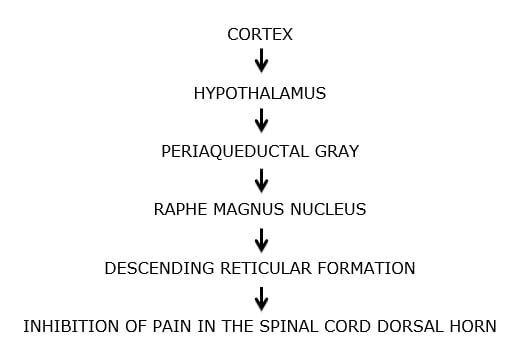 Although this sequence has a number of synonyms, classic terminology is the Descending Pain Inhibitory Control System. 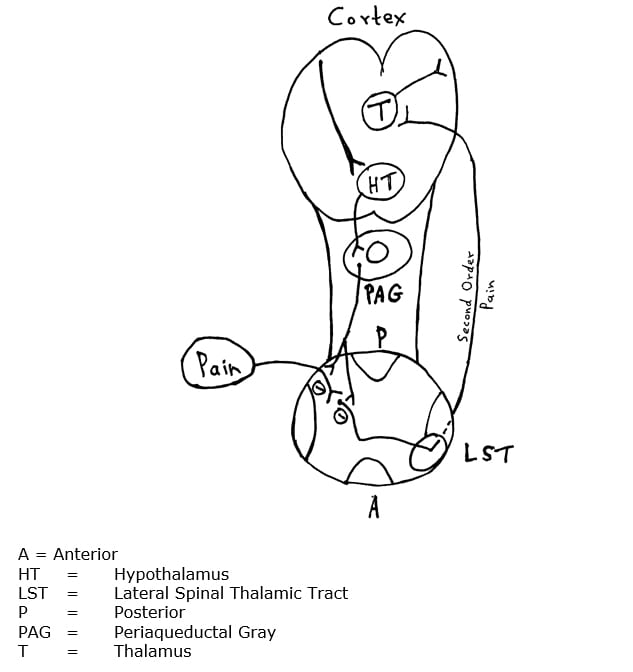 Stimulating the Descending Pain Inhibitory Control System with opiate pharmacology has problems. There are opiate receptors throughout the central nervous system and opiate drugs influence these other receptor sites. Often, the patient would become “high” from these drugs, and patients would begin to consume these drugs for purposes other than pain control. The getting “high” practice is difficult to control; thousands of babies are born addicted to their mother’s opiate pill habit (12). Radio talk show host Rush Limbaugh risked his reputation, fame, fortune, and freedom in an effort to have a staff person purchase huge quantities of opiate drugs, a habit that apparently began when he was given a prescription for a back problem (13).

In a related story, addiction to opiate drugs is a serious and common problem. In May 2014, the newspaper USA Today quantified the problem noting (14):

These addictions are ruining many lives. When the supply of physician prescribed opiates declines, those addicted often turned to street drugs such as heroin or cocaine. Many turned to crimes to finance their habits. Opiate drug addictions are extremely difficult to conquer.

As noted by Stephanie Lee above, taking opiates for migraine causes a worsening of the headache to the status of chronic migraine in a substantial number of individuals (1).

Stimulating the Descending Pain Inhibitory Control System electrically is also problematic. Electrodes must be placed literally deep into the brainstem to access the periaqueductal gray matter. Such a procedure is logistically difficult to perform and is associated with substantial risks.

A much less invasive yet effective method of stimulating the Descending Pain Inhibitory Control System is with the use of acupuncture (15). The use of acupuncture for this purpose is well detailed in the 2000 book by Stux, titled Clinical Acupuncture, Scientific Basis, published in 2000 (16).

In 1996, Bill Vicenzino and colleagues from the University of Queensland, Australia, added significantly to the understanding of the mechanism of pain control through the use of spinal manipulation (adjusting) (17). Vicenzino and colleagues produced a randomized, double blind, placebo controlled clinical trial using cervical spine manipulation (adjustment) on 15 subjects with lateral epicondylalgia (elbow pain). These authors cite references to support that the “clinical efficacy of manipulative therapy has been demonstrated in randomized clinical trials which report benefits in terms of pain relief and more rapid restoration of function.”

Their study showed a clear hypoalgesic effect from the use of spinal manipulation (adjusting). The results showed a “significant treatment effect beyond placebo or control.” The authors concluded: “manipulative therapy is capable of producing improvements in pain and function immediately following application.”

These authors made several astute and important observations, including:

Based upon these factors, and others, the authors concluded:

“These findings indicate that manipulative therapy may constitute an adequate physical stimulus for activating the descending pain inhibitory system.” 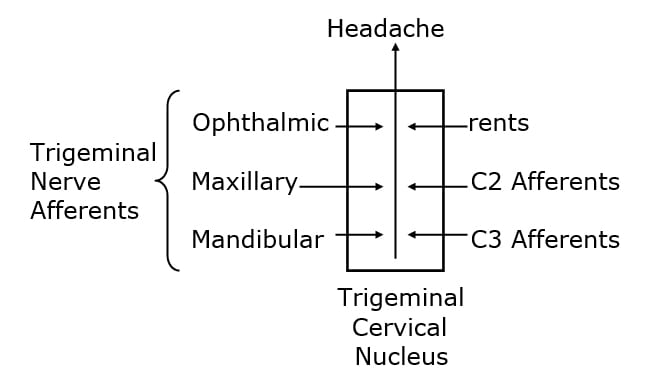 Most recently (July 2014), Nelly Boyer and colleagues from Clermont University in France, have indicated that migraine headache progression is attributed to impairment of the descending pain inhibitory system to the trigeminocervical nucleus (19).

Effects on the Nociceptive Blink Reflex 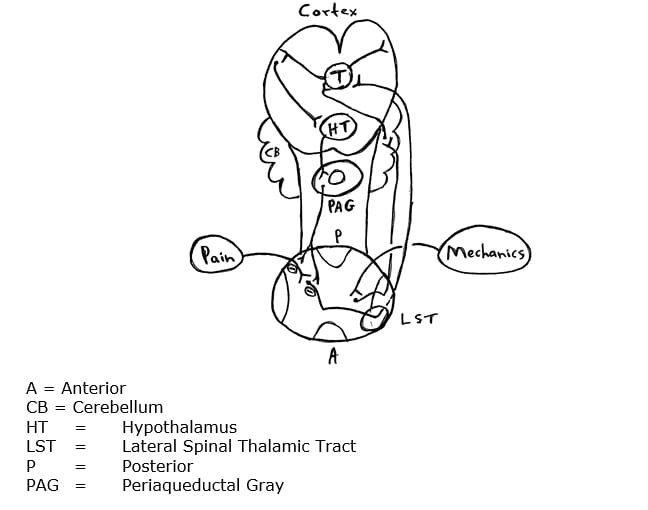