You are here: Home / Advanced / Spinal Joint Mechanoreceptors, Proprioception, and The Pain Gate
197
SHARES
Share on FacebookShare on Twitter
GoogleLinkedin

In his career, Dr. Kirkaldy-Willis published 71 articles that are indexed in the National Library of Medicine, and he was the primary author of the universally accepted gold standard reference text Managing Low Back Pain, which published four editions between 1983 and 1999.

The August 15, 2006 issue of the journal Spine printed a tribute to Dr. Kirkaldy-Willis, which included these words (1):

Kirkaldy-Willis was one of the very few spine surgeons who recognized, at the very beginning, the important role of exercise in maintaining a healthy spine. An important special interest of his was in promoting cooperation between physicians and chiropractors to the benefit of both.

In 1985, Dr. Kirkaldy-Willis was the lead author of a study published in the journal Canadian Family Physician (2), titled:

“Spinal Manipulation in the Treatment of Low back Pain”

In this study, Dr. Kirkaldy-Willis notes that spinal manipulation is one of the oldest forms of therapy for back pain, and that it has mostly been practiced outside of the medical profession. He further notes that there has been an escalation of clinical and basic science research on manipulative therapy, which has shown that there is a scientific basis for the treatment of back pain by manipulation.

In this study, Dr. Kirkaldy-Willis discusses that a specific diagnosis and pathology is not evident in most cases of low back pain, but that compressive neuropathology is extremely rare. Specifically, he states:

“Most causes of low back pain lack objective clinical signs and overt pathological changes.”

“Less than 10% of low back pain is due to herniation of the intervertebral disc or entrapment of spinal nerves by degenerative disc disease.” 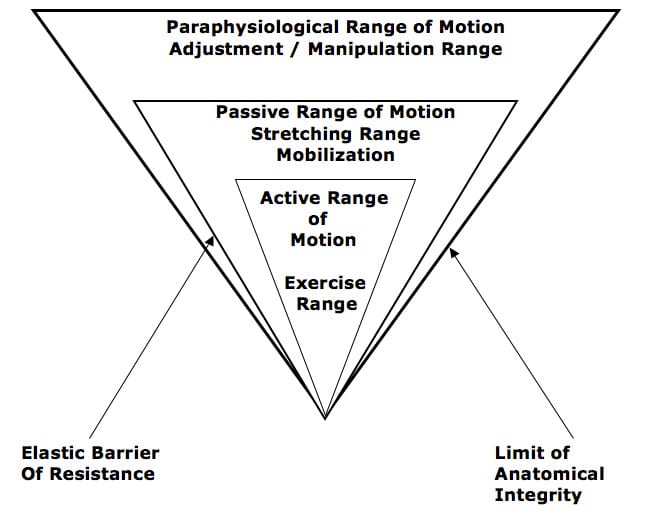 Dr. Kirkalady-Willis discusses how the key to successfully managing chronic low back pain is through the utilization of applied motion. He categorizes applied motion into three groups:

The cracking sound on entering the Paraphysiological Range of Motion is the result of sudden liberation of synovial gases—a phenomenon known to physicists as cavitation.

In this study, Dr. Kirkaldy-Willis presents the results of a prospective observational study of spinal manipulation in 283 patients with chronic low back and leg pain. All 283 patients in this study had failed prior conservative and/or operative treatment, and they were all totally disabled (“Constant severe pain; disability unaffected by treatment.”)

“In most cases of chronic low back pain, there is an initial increase in symptoms after the first few manipulations. In almost all cases, however, this increase in pain is temporary and can be easily controlled by local application of ice.”

“Patients undergoing manipulative treatment must therefore be reassured that the initial discomfort is only temporary.”

In this study, Dr. Kirkaldy-Willis considered a good clinical outcome from manipulation to be:

81% of the patients with referred pain syndromes subsequent to joint dysfunctions achieved the “good” result.

These results are impressive, especially considering that all of the patients were chronic, disabled and had failed prior conservative and surgical approaches to their problems.

The facet capsules are densely populated with mechanoreceptors. “Increased proprioceptive input in the form of spinal mobility tends to decrease the central transmission of pain from adjacent spinal structures by closing the gate. Any therapy which induces motion into articular structures will help inhibit pain transmission by this means.”

Importantly, Dr. Kirkaldy-Willis pioneered the concept of the “three joint complex.” This concept stresses that the function of the two facet joints are always linked to the function of the intervertebral disc. In other words, the facets and the disc are mechanically linked.

As noted, Dr. Kirkaldy-Willis’ discussion of the Gate Theory of Pain involved the “closing” of the pain gate through the enhancement of proprioception. This was done by increasing the firing of mechanoreceptors of the facet joints, which occurred as a consequence of moving the facet joints into the Paraphysiological Range of Motion via spinal manipulation.

Many other authors make similar claims concerning the Gate Theory of Pain, including the following:

In 2002, the British Journal of Anaesthesia published a study reaffirming the validity of the Gate Theory of Pain in an article titled (8):

“Gate Control Theory of Pain Stands the Test of Time”

In this study, Dr. Korr notes that proprioceptors “from countless thousands of reporting stations and articular components, entering the cord via the dorsal roots, is essential to the moment-to-moment control and fine adjustment of posture and locomotion.”

Dr. Korr discusses the feedback loop that exists between these proprioceptors and the muscle system. He notes that adverse or inappropriate mechanical events can create a mismatch of communication within the feedback loop, which is deleterious [opens the pain gate]. He also notes how the adverse loop can be corrected through spinal manipulation.

The authors document that the human cervical intervertebral disc is innervated with mechanoreceptors. They state:

“The presence of neural elements within the intervertebral disc indicates that the mechanical status of the disc is monitored by the central nervous system.”

“The location of the mechanoreceptors may enable the intervertebral disc to sense peripheral compression or deformation as well as alignment.”

“The presence of these receptors in the facet capsule indicate that the mechanical state of the capsule (position, tension, pressure, etc.) is under the surveillance of the central nervous system.”

“The presence of mechanoreceptive and nociceptive nerve endings in cervical facet capsules proves that these tissues are monitored by the central nervous system and implies that neural input from the facets is important to proprioception and pain sensation in the cervical spine.”

In 1998, the same primary author and colleague investigated the presence of mechanoreceptors in the facets joints of the thoracic and lumbar spines. They published their findings in Spine in an article titled (12):

“Encapsulated nerve endings are believed to be primarily mechanosensitive and may provide proprioceptive and protective information to the central nervous system regarding joint function and position.”

The authors documented the occurrence and morphology of mechanoreceptors in human and bovine intervertebral discs and longitudinal ligaments. They note that:

Physiologically, these mechanoreceptors “provide the individual with sensation of posture and movement.”

“In addition to providing proprioception, mechanoreceptors are thought to have roles in maintaining muscle tone and reflexes.”

“Their presence in the intervertebral disc and longitudinal ligament can have physiologic and clinical implications.”

More recently, in 2010, the Journal of Clinical Neuroscience published a study titled (14):

“An immunohistochemical study of mechanoreceptors in lumbar spine intervertebral discs”

“These receptors have a key role in the perception of joint position and adjustment of the muscle tone of the vertebral column.”

“An important component of low back pain is an intense muscle spasm of the vertebral musculature, elicited through reflex arches mediated by specialized nerve endings.”

“In conclusion, this study confirms the existence of an abundant network of encapsulated and non-encapsulated receptors in the intervertebral discs of the lower lumbar spine in normal human subjects. The principal role of encapsulated structures is assumed to be the continuous monitoring of position, velocity and acceleration (kinesthesia).” 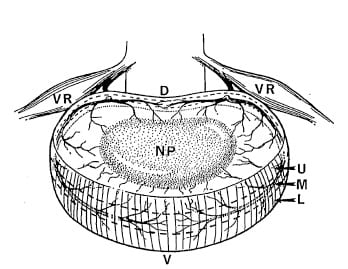 When a patient presents with spinal pain syndrome to a chiropractic office, history usually reveals that a chemical (pharmaceutical) solution has been tried or is concurrently being tried, often with unacceptable results. In these cases, chiropractors primarily look for mechanical problems.

According to low back pain pioneer, Dr. Kirkaldy-Willis, spinal adjusting (manipulation) influences and benefits the back pain patient through two mechanisms:

Importantly, Dr. Kirkaldy-Willis notes that once an adjustment breaks the adhesion, they will often reform to create the same degree of adverse joint mechanical function. His solution, as documented in his 1985 study above (2), is that the patient be adjusted daily for two to three weeks, at a minimum. His study included prior chiropractic failures, and he attributed the success of the new chiropractic intervention to daily spinal adjusting for two to three weeks. Dr. Kirkalady-Willis states:

“However, the gain in mobility must be maintained during this period to prevent further adhesion formation.”

“In our experience, anything less than two weeks of daily manipulation is inadequate for chronic low back pain patients.”

It is chiropractically important to understand that the intervertebral disc and facet capsules (and other tissues) are innervated with mechanically sensitive nerves that communicate with the central nervous system. These nerves tell the CNS about the mechanical status of spinal function and alignment of the spine, as well as controlling local neuromuscular reflexes and the Pain Gate. Undoubtedly, chiropractic adjustments influence these nerves both during an adjustment and afterwards as a consequence of improved biomechanical function and posture.