Perhaps the best reference book pertaining to the jaw is the 1991 text by Andrew Kaplan, DMD and Leon Assael, DMD, titled Temporomandibular Disorders, Diagnosis and Treatment (1).

This book has 31 distinguished contributing authors, 35 chapters, and 754 pages.

Drs. Kaplan and Assael note a delay of symptomatology, or latency, is often observed in patients with temporomandibular disorders. They state:

They note in the case of temporomandibular pain as a consequence of forward head posture that symptoms may be delayed for as long as a “few years.”

Supporting Drs. Kaplan and Assael’s comment on temporomandibular joint delay of symptoms is a recent (2007) prospective study published in the Journal of the American Dental Association, titled (2):

In this study, the authors studied 60 consecutive patients who had neck symptoms after whiplash trauma and were seen at a hospital emergency department. They followed up 59 subjects one full year later. At the initial examination and at follow-up, each subject completed a self-administered questionnaire, followed by a comprehensive interview. Fifty-three frequency-matched control subjects followed the same protocol concurrently. The authors found that the incidence of new symptoms of temporomandibular joint pain, dysfunction or both between the initial examination and follow-up was five times higher in subjects (34 percent) than in control subjects (7 percent).

A summary of the initial and final (one year later) evaluation is as follows:

Additional findings from this study include:

1)      Temporomandibular joint symptoms were consistently located “at the site immediately in front of the ear canal and tragus.”

5)      At follow-up, “one in three subjects reported having temporomandibular joint pain, which was five times more frequent than in control subjects.”

7)      “One in three people who are exposed to whiplash trauma, which induces neck symptoms, is at risk of developing delayed TMJ pain and dysfunction with onset during the year after the accident.”

A recent article has quantified the risk of developing painful jaw movements following whiplash trauma and comparing such risk to a control population (10). It was published in 2007 in the Journal of the American Dental Association, and titled:

In this study, all adults filing collision-related personal injury claims during an 18-month period in Saskatchewan, Canada, were evaluated via questionnaire to determine demographic characteristics, pre-collision health (including jaw pain), collision parameters and collision-related symptoms, including reduced and/or painful jaw movement and injury-related neck pain. The authors excluded patients who were hospitalized for more than two days and those who sustained injuries as a pedestrian, bicyclist or motorcyclist. The authors also excluded those who had had jaw pain before the collision.

“Temporomandibular Disorder consists of varying combinations of jaw pain or dysfunction, headache, dizziness   and auditory disturbance, and is considered to be clinically relevant after collision-related injuries, especially in people with whiplash injuries.”

Very recently (2008), The Journal of Contemporary Dental Practice published an article qualifying the nature of the temporomandibular joint disorders seen in a clinical setting. The article is titled (11):

In this study, the authors assessed the correlation of temporomandibular joint internal derangement in patients with the presence of headache, bruxism, and joint pain using magnetic resonance imaging (MRI). They evaluated 42 symptomatic patients and compared them to 16 asymptomatic controls.

These authors found that common temporomandibular disorder complaints include:

“Temporomandibular joint effusion represents an inflammatory response to a dysfunctional disk-condyle relationship,” and this is associated with pain and headache.

“Patients with unexplained headaches should be considered for evaluation of the presence of internal derangement and inflammation of the temporomandibular joint.” 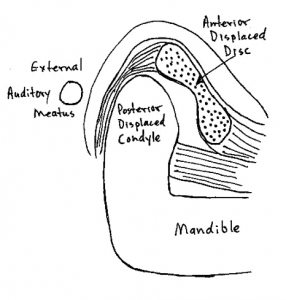 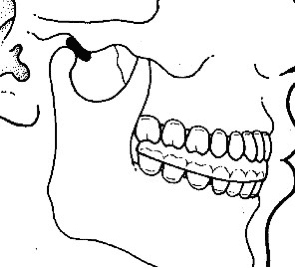 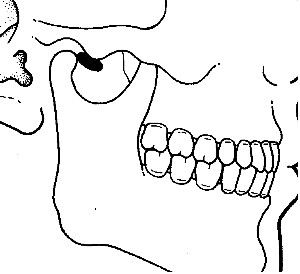 Reductive adjustment of the temporomandibular joint. The mandible is manually distracted anterior and inferior while the skull is stabilized “in an effort to manually reduce the displaced disc.” The adjustment involves controlled distraction only, there is no thrust.(After Kaplan and Assael) 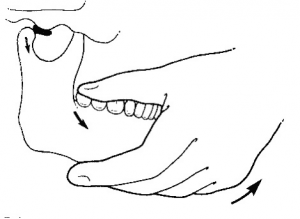 In 1998, the journal Clinical Oral Investigations, published a study titled (12):

The results indicated that segmental limitations (especially at the Occiput-C3 levels) and tender points (especially in the m. sternocleidomastoideus and m. trapezius) are significantly more present in patients than in controls.

Additional support for a cervical spine and temporomandibular functional relationship was published in 2004 in the European Journal of Oral Sciences and titled (13):

These authors note that jaw movements are the result of activation of jaw as well as neck muscles, leading to simultaneous movements in the temporomandibular, atlanto-occipital and cervical spine joints. Therefore, injury to the neck would disturb natural jaw function. Anatomical, biomechanical, neuroanatomical, neurophysiological and clinical studies indicate that the mandibular and the craniocervical regions are functionally linked. Natural jaw activities require a healthy state of both the mandibular and the head–neck motor systems. Natural jaw actions require a healthy state not only of the temporomandibular joint but also of the atlanto-occipital and the cervical spine joints. Head-neck trauma can be an etiological factor behind temporomandibular disorders. Neck injury from whiplash is associated with deranged control of mandibular movements which compromise jaw function.

These authors are indicating that the pain in the jaw following whiplash injury is not primarily from direct trauma to the jaw. Rather, they are presenting evidence that supports that whiplash injuries to the cervical spine alter the normal function of the jaw. Injury to the upper cervical spine causes a reflex to the muscle spindles of the jaw muscles, which are extensive. The jaw muscles contract, resulting in more dysfunction and pain. These authors are using a neurological model rather than an orthopedic model for temporomandibular dysfunction following whiplash trauma.

Additional support for a cervical spine and temporomandibular functional relationship was published very recently (2008) in the Swedish Dental Journal and titled (14):

These authors note that jaw opening-closing movements are the result of coordinated activation of both jaw and neck muscles, with simultaneous movements in the temporomandibular, atlanto-occipital and cervical spine joints. Consequently, pain or dysfunction in any of the three joint systems involved could impair jaw activities.

These authors concluded that examination of jaw function should be recommended as part of the assessment and rehabilitation of whiplash-injured patients.

These cervical spine / temporomandibular relationships are summarized in the following graph: 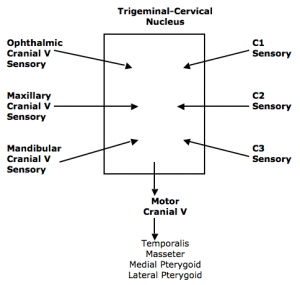 Both the sensory divisions of the Trigeminal nerve (cranial V) and the sensory branches of C1-C2-C3 converge in the trigeminal-cervical nucleus of the medulla and upper cervical cord.

Both can subsequently activate the motor division of the Trigeminal nerve (cranial V), which innervates the temporalis, masseter, medial and lateral pterygoid muscles.