You are here: Home / Back Pain / Where Does Low Back Pain Come From?
1947
SHARES
Share on FacebookShare on Twitter
GoogleLinkedin

“Were does the pain come from?” is probably the most commonly asked question we hear as chiropractors and frequently, the patient is not told the answer to this simple question. The problem is, the question is not so simple. This is because there are many structures in the low back that share a common nerve supply and hence, the pain arising from those structures is located in the same area of the back. For example, the back portion of the disk, the facet capsule, and some of the deep muscles in the spine are all innervated by the same nerve and therefore hurt in a similar location. In all honesty, the only way to try to isolate the pain generator is to inject a local anesthetic to block the pain for a short while. This is like when you go to the dentist and they “numb” your tooth so you don’t feel the pain while they work on it. After a few hours, you start to feel some “life” coming back to your mouth and soon it regains its full feeling. Of course, no one would consider “numbing” the back just to figure out exactly where the pain is arising as really, it’s not that important. This is because the chiropractic treatment approach is similar regardless of the exact tissue that is involved. However, it DOES matter in cases where a pain radiates down the leg caused by a herniated disk vs. a localized pain in the back that doesn’t radiate. Hence, we doctors of chiropractic will work hard to differentiate these two distinct types of conditions as the treatment is definitely different.

In 1995, the Quebec Task Force recognized the importance of this distinction and recommended all healthcare providers concentrate on differentiating the nerve root / herniated disk case from what is called “mechanical low back pain.” As noted in the model below, the arrow and pen point to the two most common structures that cause nerve root pain (the herniated disk) and mechanical low back pain (the facet joint). 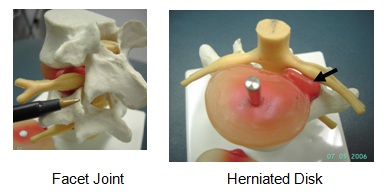 The facet joint, when sprained / injured, hurts worse when bending backwards and feels good bending forwards. This is exactly the opposite for the herniated disk where bending backwards helps reduce pain and often reduces the shooting leg pain as well, while bending over even a little can create a sharp stabling pain in the back that may shoot down the leg. Of course, there are variations of this and to make matters more complicated, BOTH the disk and the facet can generate pain at the same time, so it’s not always this cut and dry.